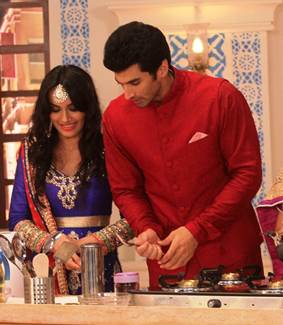 He's had women swoon over his chocolate boy good looks in Aashiqui 2 ... Aditya Roy Kapur now returns to the big screen opposite Parineeti Chopra in his next movie - Dawaat-E-Ishq. The handsome actor was seen promoting his movie at Zee TV's Eid special - Dawaat-E-Eid. Playing the character of a bawarchi who cooks up a storm at the drop of a hat in the film, looks like Aditya Roy Kapur has mastered the art of cooking in real life too.

Getting into the skin of his character, Aditya was seen having a lot of fun cooking on the sets. As a part of the script, the female actors of Zee TV were asked to cook certain authentic dishes for the evening. While the girls seemed to know it all, Aditya happened to overlook all that was being cooked. On understanding that the girls were however finding it a little difficult to follow the recipes to the tee, Aditya ended up using his newly acquired culinary skills. Helping the girls cook up a delight, Aditya enjoyed cooking with them to bits. While there were experts around, Aditya ended up giving some final touches to each of the dishes.

Talking about Aditya Roy Kapoor's culinary skills, Sanam (played by Surbhi Jyoti) of Qubool Hai said, "When I was first asked to cook at the event, I was taken aback. While they promised us expert help, there were times when we would get stuck in between shots. At this time, Aditya was a blessing in disguise for us. We were shocked to see him give us suggestions with such perfection. At times, he would stop our shots to ensure that were adding the right ingredient to cook a dish. All in all, all of us had a fab time with him helping us."

While the stars seemed to have fun cooking up these delicious dishes, the audience is in for a visual as well as a gastronomical treat this Eid!

6 years ago Surbhi Jyoti charming and attractive!!!! Love you...

6 years ago Surbhi Jyoti u r simply the best
Love u!

keep rocking Surbhi Jyoti
love u so much
QH rocks

6 years ago Surbhi Jyoti you were amazing last night. love you Surbhi Jyoti... you were tremendously stunning in yesterday's dawat...loved Sahil...