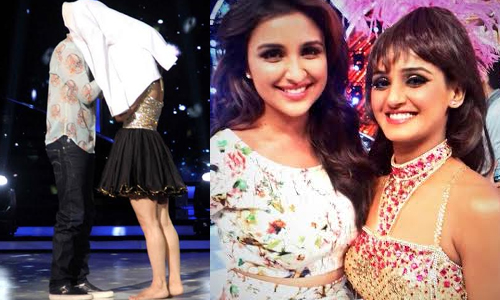 Colors' popular dance reality show Jhalak Dikhhlaa Jaa Season 7 has reached its 13th week and with the new theme 'Teen Ka Tadka', the contestants have pulled up their socks to give the audience as well the judges a stellar performances.

This time it is Dawaat-E-Ishq stars Aditya Roy Kapoor and Parineeti Chopra will be seen promoting their upcoming movie Daawat-E-Ishq on Jhalak Dikhhlaa Jaa Season 7. And to entertain his fans Aditya will recreate the very popular 'under the jacket' sequence live to the audience and that too with Mouni Roy.

While Aditya chooses Mouni for a dramatic sequence, Parineeti admits to be a fan of Shakti Mohan.

Yes, Parineeti Chopra who is known for her commendable performances in various films she admits to be a Shakti's biggest fan. The actress claims to love Shakti's Bollywood debut item song 'Aa Re Pritam Pyaare' and had always wished to see the graceful dancer in action.

Shakti will be seen doing a cabaret leaving everyone stunned with her performance. Especially Parineeti who will praise her.

tEENkRmNsR 6 years ago Super proud of u shakti mohan...
Cant wait for ur performance!!!!!

..Rish.. 6 years ago Shakti Mohan you are simply phenomenal as always!! Can't wait for the weekend to come! Love you Shakti Mohan

Rajeshwari_KR 6 years ago Love you Shakti Mohan...
Waiting for weekend...

No wonder soo many ppl love you too..!!!