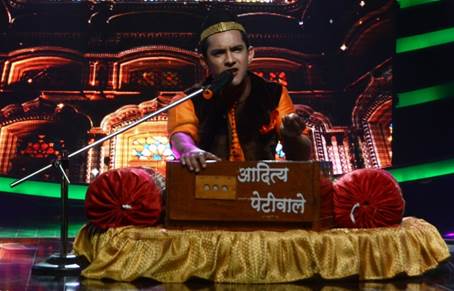 As the weeks are passing by, the challenge for the talented kids of Zee TV's Sa Re Ga Ma Pa Li'l Champs 5 is only getting tougher. A dedicated theme, week after week, gives the young contestants a chance to learn various new forms of singing and put their best foot forward. This week's theme being Qawwali special', the makers of the show not only decided to change the look and feel of the sets, but also decided to give the host of the show - Aditya Narayan and the captains - Shaan and Monali a special look for the episode.

Clearly having had a makeover of sorts with a sufiyana topi, Aditya began the episode with a Qawwali. Wanting to perfect his Qawwali look to the T', he asked the production house to bring him a paan. He ensured he had enough amount of paan stuffed in his mouth to last him through the entire course of the qawwali and give him a perfect red tinge of betel juice on his lips. Not convinced with the first shot, Aditya ran backstage and gulped down three paans one after the other, till he thought he got the look right. Delaying the shoot for a bit, Aditya ensured that he looked his part on-screen.

Ayushmann Khurrana and Mithun Chakraborty - who were on the sets to promote their upcoming movie - Hawaizaada, were surprised to see the little ones sing some classic qawwalis they'd never thought such young kids would have even heard of. Joining a contestant Isis Paul, Ayushmann Khurrana presented a special qawwali mash-up which consisted of his songs - Paani Da, Saadi Gali, Mitti Di Khushbu.

Having created an impromptu qawwali tune for his songs, Ayushmann spoke of the talent and said, "I feel the future of India is in safe hands after having heard these kids. The kind of talent they have is unmatched and they are better than many professional singers in our industry. One can only imagine the heights they would scale by the time they grow up . I wish them all the luck and thank them for having me here today."