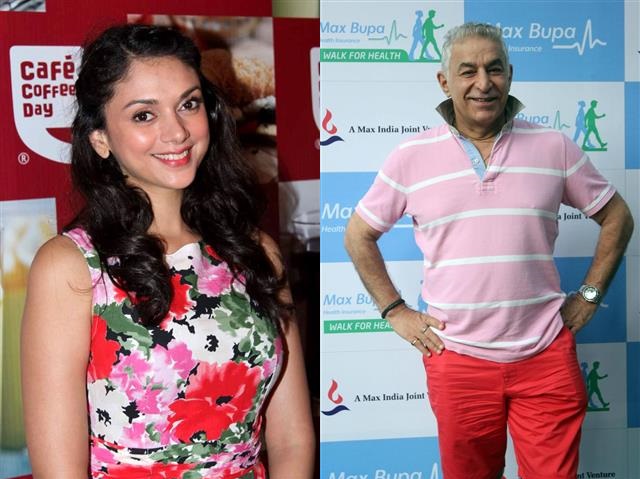 Aditi Rao Hydari and Dalip Tahil will be seen as daughter and father in a short film titled "Kanyadaan" which focusses on domestic violence and father-daughter relationship.

The short film will go live on video entertainment app #fame's YouTube channel on Father's Day, which falls on Sunday, read a statement.

In its essence, it's a fashion video with a wedding as a backdrop, but ends with a social service message that fathers should teach their daughters to raise their voice against marital abuse and give them the option to come back home if the marriage doesn't work out.

The film starts with a bride getting ready for her big day in a beautiful room decorated with flowers and more. A traditional wedding track plays in the background. At first, one gets to see her back, she knots her lehenga and twirls gracefully.

The camera pans upwards and then one sees it's Aditi. She smiles and sits down in front of a dresser and wears a choker necklace.

Next she puts on a maang tika.

She puts on red and green bangles and plays with them looking into the camera.

As she reaches out to the final bangle, the camera pans to show airline tickets for two.

She is ready now, she stands up and coyly admires herself in the mirror. Then she gets a message on her phone. The phone is lying on a table on a newspaper. She looks at the message on the homescreen. It says: "Dear wife-to-be, can't wait to see you! Love, hubby-to-be."

She reads the message and smiles, but her smile fades away when she looks at the newspaper headline that reads: "New Cases Of Domestic Abuse Shake India".

She becomes sad and sits down, lets out a deep breath questioning her future. Right then a hand rests on her shoulder, she looks up, it's her dad. She has a huge question mark on her face.

The father smiles, bends down, whispers something into her ears. As he whispers, one sees that her expression changes from that of nervousness to child-like happiness, her innocent smile returns.

The film ends with her putting her arm around his and them walking away into the hallway.

Aditi Rao Hydari opens up on designing a line of athleisure created ...