View Profile
Living up to the current Bollywood trend, now Shekhar Suman’s son Adhyayan too is sweating it out to have a six pack abs. This one time fat guy believes that getting a six pack wouldn’t be such a hard target to achieve. “See, I was 115 kgs last year and now I am 73. I 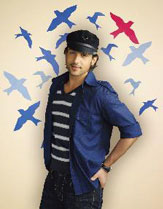 Featured Video
would also achieve six packs pretty soon,” says confident Adhyayan Suman. Adhyanan also isn’t much worried much about the tough competition he would have to face with the new bunch of fresh talent like Harman Baweja and Imraan Khan. “I never think about competition because I loose my focus other wise,” utters the young gun.

Well, it seems that the actor is really working very hard on his filmy career to make sure that he doesn’t get tagged as a flop Bolly-actor as his dad Shekhar Suman.