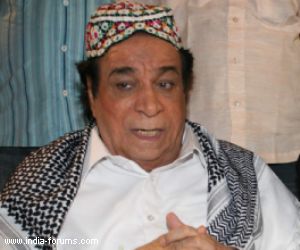 For over 40 years we have known Kader Khan for his humour and dialogues. But now this Kabul-born Bollywood actor is immersed in academics. He has designed courses for studies in Arabic and Urdu languages and says education can remove lot of misconceptions about religion.

The veteran actor is set to fly to Dubai to take forward his dream of educating as many people in Arabic, Urdu and Hindi. Currently he is working on setting up the K.K. Institute of Arabic Language and Islamic Culture at Knowledge City in Dubai.

"I have been developing short and long-term courses in Arabic, Urdu and Hindi languages. All the hard work has paid off and I am now looking forward to teaching these languages to all those NRIs who prefer to keep in touch with the languages and culture," said Khan.

Khan is also planning to create an entire syllabus from nursery to post-graduation in Islamic studies.

"For these courses, I have taken all the Urdu and Arabic texts and created a simplified version of it. These texts are generally written in a form not easily understood. In some cases I have also translated the text to Hindi," he said.

Apart from Dubai, Khan is also gearing up to open an institute in Toronto, Canada, where he will teach these languages. "When I come back to India next year, I shall take up similar activities and classes here also," he said.

Khan, while talking, often mentions his mother Iqbal Begum and credits her for inculcating the importance of education in him. His father, Abdul Rehman, who taught in madrassas, added to the inspiration.

Reminiscing about his early years, Khan said he was barely a year old when he came to Mumbai.

"I was born in Kabul, Afghanistan, in 1952. But my mother was scared of raising me there. Three of my elder brothers had died before they were eight years old. My mother believed there was something wrong in the Kabul air," he rued.

"But the days weren't easy even after we came to Bombay. We used to stay in a filthy slum in the red-light area as that was the only place we could afford. Although poverty-stricken, my mother insisted that I do not give up studies. She even took me to task once when she discovered that I was planning to work in a tin factory to earn a few rupees," Khan added.

It was then that he realised the value of education and never looked back, said Khan. He went on to do his diploma in engineering and also taught several subjects like the theory of structures, hydraulics and strength of materials at M.H. Saboo Siddik College of Engineering in Byculla in south-central Mumbai as professor of civil engineering.

His love for academics and education reflects in the ceiling-high bookshelves lining every wall in his small office.

"I had been an academician and I feel now is the time to go back to it. When I open a full-fledged school of Islamic language studies, I will dedicate it to my parents who inspired me. I love my mother for making me who I am today. She was a lioness, who taught me how to read, to write, to live my life and be the best," he said with pride.

Khan believes educating more people is the best way to eradicate poverty and religious misconceptions. "It is very fulfilling to educate people. Moreover, the more you are educated, the more you will be ready to explore broader horizons and that will bring peace," he said.

"The ill name of Islam is something I want to wash off. Islam spreads peace and if I can do my small bit in spreading harmony, I don't want anything else," he added.

In his illustrious career, as an actor and dialogue writer, Khan has acted in 450 movies and written dialogues for over 250 films. He won the Filmfare Award for best comedian in 1991 for "Baap Numbri Beta Dus Numbri" and a Screen Award for best performance in a comic role in 1995 for "Taqdeerwala".