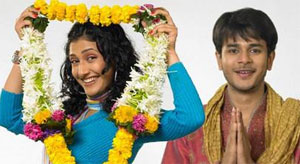 The shoot of Star Plus' popular show Sasural Genda Phool was disrupted recently when few Manase activists came to the sets and created ruckus.

An eye witness told us, "The activists came all of a sudden with a complaint that the junior artistes working on the set do not have their cards in place. They literally halted the shoot, and an argument broke out. It took some time for the entire issue to get sorted out, after which normalcy was restored".

We contacted Jay Soni who said, "I was not there on set, but yes I have heard about such a thing".

Tapeshwari Sharma aka Sanjana in the show said, "Yes, it is true that the mob entered into our sets. I am not aware of the complaint they had. I was inside the makeup room when this happened. The shoot got halted for some time, but all was fine in few minutes".

We tried to get a word on this from Producer Zama Habib, but he rubbished the news.

veenasudhij 9 years ago the shw is geting borng nw..infct ths was the one most relaxing shw 4 me bcse f the comedy elmnt...bt nw ths also strt trvling the way a typical Indian serial..

smallwonder 9 years ago Whatever... The show is rotting in anycase...

madhu_d 9 years ago Is this a news???? paise kamane ka aasaan rastha...

_Procrastinator 9 years ago some one plzz tell me that what shud i comment.???