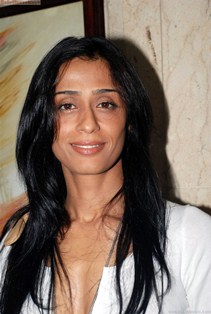 Talented actress Achint Kaur who was last seen in Ek Veer Stree ki Kahaani Jhansi Ki Rani on Zee TV, made her way into films after taking a gap from TV. The actress has been working in Television from many years and is loved by the audience for her outstanding performance. Achint is known for playing the vamp as Mandira in Kyunki Saas Bhi Kabhi Bahu Thi. Recently Achint was seen in the popular film 2 States.


Well, as per the news this versatile actress is all set to return to TV.

As per our reliable sources, "Achint has given a look test for an upcoming show Jami Raja on Zee TV starring Nia Sharma and Ravi Dubey.  Most probably Achint has been finalized to play a pivotal role in the show. She has not yet started shooting."

When we asked her about the upcoming show Jamai Raja she says, "I cannot talk about it, if things are finalized then I will surely talk about it but at present it's not the right time to talk about it."

As the actress will be seen again on TV, we asked Achint to know more about her love for Television and she says, "I have been working in television from past 15 years, I had just taken a break to do theater and films and I had to come back on Television. I won't say that I am more attached to Television than films or theater because I am a person who want to do everything. So after doing the film I planned to come back on television."

come back soon with a big bang

waiting eagerly for the show to begin

loving ur pics with ur co-star ravi

iamanaida 6 years ago Nia Sharma, we are all excited to see you back with all the other show casts. Great luck ahead !!