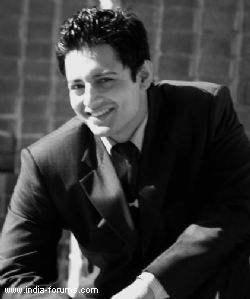 Life OK'sMain Lakshmi Tere Aangan Ki has already seen the revelation part in the show where not only Ajay's (Abhishek Tewari) real identity is disclosed but also the reason behind his exchange of identity with Arjun (Sudeep Sahir).

Now we hear, that today's telecast would see the last scenes of his character.

A source states, "Today in the show, during the engagement sequence, Ajay would make his last appearance after which he would not return to the frame again. This would be the end of his character. Abhishek has already shot for his last sequence."

We contacted Abhishek who states, "Yes, in today's telecast my character would just attend the engagement ceremony and then make an exit. It was great working for Shashi-Sumit Mittal's show and apart from that I also gelled well with Aroona Irani as a person."

When asked about taking up other shows, he says, "Currently, I am going back to Delhi for Holi and would be back after some time. If things fall in place, I would definitely be seen in some show post-IPL," signs off Abhishek.

Hope to see you soon as your fans are eagerly waiting!

shelly_nair 8 years ago hope that u comeback very soon with new project. all the best.

springs 8 years ago Best of luck to him...its nice to see Arjun & Lakshmi together...

love_never_dies 8 years ago All the best for your upcoming shows abhi.. happy holi ..

Cathy25 8 years ago All the best for your future shows.

Thank you for playing Cupid's(dadi) helper and bringing Lakshmi and Arjun together.

FrozenRain 8 years ago best of luck abhishek for ur upcoming prjts...

LuvAbhiyaarjuhi 8 years ago oh that is too saddest to know about his exit from show as he was great actor too there , would miss your presence .
all the best for new shows . hope that you come back very soon on telly-vision screen..

bones88 8 years ago awww going to miss him.. all the best for ur future projects

-Mrs.MSK- 8 years ago Ohh Will miss You :( All the best for ur future projects !

Urmila Matondkar Does Not Regret, But Ready to Apologise for ...
48 minutes ago