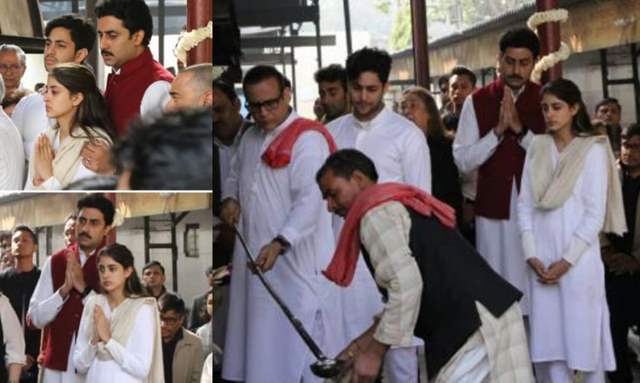 The Kapoor and Nanda family are in shock, and mourning the death of their precious family member. Reportedly, the last rites will be performed at 1.30 pm at Lodhi Road cremation ground. While Amitabh Bachchan and Aishwarya Rai Bachchan were spotted leaving the city to arrive at the funeral, Abhishek Bachchan along with his kids have already paved their way to Ritu Nanda’s funeral.

Abhishek with Shweta Bachchan's daughter and son Navya Naveli Nanda and Agastya Nanda have arrived for the funeral. Besides, Rishi Kapoor with daughter Riddhima Kapoor, and Randhir Kapoor, Rajiv Kapoor also arrived at the funeral. Ritu Nanda's wife Reema Kapoor and his son Aadar Jain too were spotted to pay their last respects.

Ranbir Kapoor’s sister Riddhima Kapoor Sahni penned an emotional note on her Instagram as she wrote: “To the kindest most gentle person I‘ve ever met - They don’t make them like you anymore - RIP bua #missyoualways.”

Ritu Nanda was Rajan Nanda's wife and Amitabh Bachchan’s daughter Shweta Bachchan is married to his son, Nikhil Nanda. She was the chairwoman and chief executive officer of Ritu Nanda Insurance Services.

We hope her soul rests in peace and we wish the Kapoor and Nanda family strength and courage to be able to deal with this unfortunate incident.

Abhishek Bachchan Receives Showers of Love and Praises from Fans