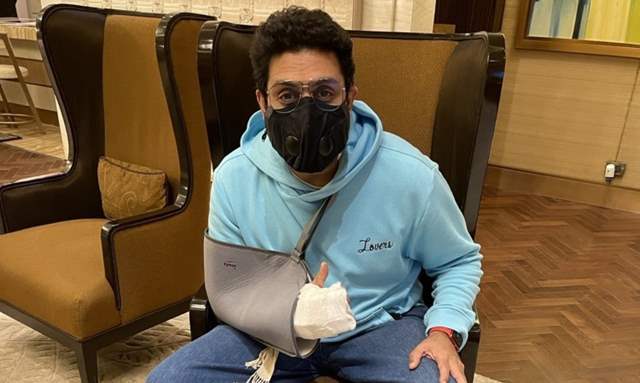 Bollywood actor Abhishek Bachchan on Thursday confirmed sustaining an injury recently after several reports suggested that he was hospitalized at Mumbai’s Lilavati hospital. The actor was even visited by his father Amitabh Bachchan and sister Shweta Bachchan Nanda, on August 22, on the occasion of Raksha Bandhan.

Taking to his Instagram handle, Abhishek shared a picture of himself with his arm in a sling. He made the thumbs-up gesture through his plaster.

His caption read, "Had a freak accident in Chennai on the set of my new film last Wednesday. Fractured my right hand. Needed surgery to fix it! So a quick trip back home to Mumbai. Surgery done, all patched-up and casted. And now back in Chennai to resume work. As they say... The show must go on! And as my father said.... Mard ko dard nahin hota! Ok, ok, ok it hurt a little. Thank you all for your wishes and get-well-soon messages."

Last week, Junior Bachchan was spotted at the airport seeing off his wife Aishwarya Rai Bachchan and daughter Aaradhya. Rai Bachchan was set to fly off to Madhya Pradesh for the shoot of her upcoming Mani Ratnam movie, Ponniyin Selvan.

On the career front, Abhishek Bachchan was most recently seen in The Big Bull alongside Ileana D'Cruz. The film was inspired by the life of tainted stockbroker Harshad Mehta, who was involved in the 1992 securities scam. He will also be seen in the film Dasvi, directed by Tushar Jalota. He will also appear alongside Chitrangda Singh in Diya Annapurna Ghosh's Bob Biswas.

2 months ago I admire his tenacity and wishing him a quick recovery! By the way, can we stop referring it as "Bollywood?" That's a cringe worthy subservience to Hollywood (which actually exists as an area). Instead, have a backbone and refer to your industry as the Hindi Film Industry or something along those lines. I would refer to him as a Hindi Film Star - sounds a lot more respectful than some imaginary nonsensical "Bolly ... whatchamacallit."