Abhinav Shukla, better known as Arjun of SAB’s Jersey No 10 is back on the small screen with a new show, albeit on a different channel. The new serial Jaane Kya Baat Hui – to be aired on COLORS is from the house of Cinevistas, the same company that produced the SAB show. 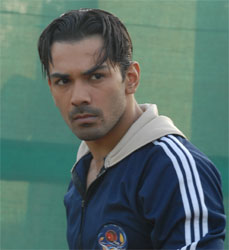 Featured Video
“I am playing the role of Shantanu who hails from London and comes to India to pursue his dreams of becoming a successful musician”, explains Shukla, who participated in the Gladrags super model contest a year and a half back.

“Shantanu stays with a couple (Shweta Tiwari and Sanjit Bedi) in India and the story deals with the troubles Shantanu faces while pursuing his dream, and also about the relationship between the three of them”, says the handsome guy..

He is a light hearted guy who loves to be the center of attraction always. “It is this nature of mine that makes me fall in love with Shweta Tiwari during the course of the story.  While Shweta likes me a lot, she loves her husband as well and this leads to a lot of confusion in her mind. The serial will also deal with the conflicts she faces and how she overcomes them”, quips the actor.

I have just started shooting for the promos of the show. “I am delighted to be part of Jaane Kya Baat Hui for two reasons; one is that it has a completely different storyline, and the other being I get the opportunity to work with Shweta”, says Shukla, who is a qualified engineer from the Punjab Technical University.

The show is in all likelihood going to replace Khatron Ke Khiladi – Fear Factor on COLORS. Abhinav's fans will have to wait for at least a couple of episodes for him to make an entry in the serial. After that, there will be no looking back – it will be his show all the way! Abhinav is also auditioning for a few big banner films. “But that does not mean anything. There are hundreds of actors who take part in auditions but only one gets selected. So till the time something concrete happens I am keeping my fingers crossed”, concludes the actor.

13 years ago im glad shweta is back! thanx for the good news:D

13 years ago Wow... Shweta accepted a role in which she might be cheating on her husband... could be interesting, thanks!