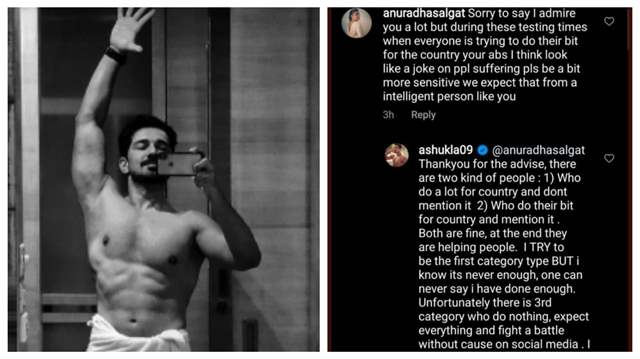 Situation surrounding continues to be extremely grim where almost everyone is trying to fight their way with this virus in one way or another and following that, everyone is also trying to make sure that people remain happy and optimistic living their life.

Public figures are amongst those people who go on to be judged for almost everything the do or post on social media and otherwise. At times, they decide to pay no attention to it and at times, they feel it is necessary that the particular thing is addressed and taken care of by giving it back to them.

A similar thing recently happened with actor Abhinav Shukla. The actor normally posted an image of him in a towel where he is flaunting his abs with a witty caption. However, this wasn't received well by one of the users who said that in these testing times, Shukla flaunting his abs comes across as a joke and that she expects a little more sensitivity from an intelligent person like him.

Shukla was quick to respond to her in his own way and penned a long note as he explained her by saying how there are three types of people where one do a lot for the country and don't mention it, one who do their bit for the country and mention it and these both are fine but the third one who do nothing, expect everything and fight a battle without cause on social media-

That was the actor's wit and intelligence at his best on display.

Arun Kushwah: Funny how people used to troll me first and now they ask ...