Neil Bhatt aka Abhi in Sunshine productions's 12/24 karol bagh on zee speaks his heart out to about his first break, outlook towards life, spiritualism and much more with tellybuzz...

How did you get your first role on television?
Like every actor I also went for auditions worked very hard on every character and then one day I got a call from Sagar productions for a show in 2006 but that didn't click.
But as per my destiny after two long years I got a call from the same production house for my first serial on Sony TV called 'Arslaan'. The casting director then told me that he remembered me from the previous auditions but then he thought of me to be raw in my acting skills that required some polishing and so I was rejected for the role of young Prithvi in the serial Prithvi Raj Chauhan earlier. 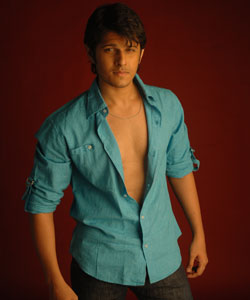 Did you always wanted to be an actor?
Yes, I had always desired to be an actor .Also I was so much involved in extracurricular activities that acting had to be the natural outcome. But I took up LAW coz it's my family business and I wanted to have something to bank upon in my career.

What do you find so special about your character in 12/24 Karol Bagh?
I find Abhi as a character is very unique. For me at first it was very difficult to play this cool dude chilled out guy as in my short career span I have always played characters which are different  but more on the serious note and when I shot for Karol Bagh I was thrown into an uncharted territory. I didn't know what to do with this character. I use to sit day and night with my script including those that I had already shot, I kept reading again and again till I got it right. So for me everything about him is special because this is the first character that got me noticed.

How's the experience working with the producer Sudhir Sharma?
He's one of the coolest producers I have ever worked with. He is so chilled out about everything takes care of his actors and most importantly he respects everybody on and off set which matters a lot for me.

Who is your favorite co-star in the show and why?
There is no favorite co-star and I love all of them not to sound politically correct but on the whole Smiriti, Sargun, Waseem and Ravi are my best friends on the set.

What are your interests other than acting?
Dancing is my passion, other than that I love working out but unfortunately now a days because of my schedules I'm unable to do that also.

Any special fetish or habits…
No nothing as such.

Do you idolize anyone?
Yes I do idolize Aamir Khan and Hrithik Roshan's work and I really follow their work.

Who are your favorite film stars?
Hrithik Roshan, Aamir Khan, Tom cruise and Will smith.

Do you have any interest in spiritualism? If yes how?
No I'm not much of a spiritualist and I'm more on the practical side of life. I like to reason out things and always try to find logic in life if it's illogical that I can't agree upon.

What is your fitness formula?
Eat good and healthy food even though I fast for a whole day once a week. It's nothing religious but I had read somewhere that Gandhiji followed this, and it is really good for your system it cleanses everything.

Are you a diet freak?
Yes I make sure that my diet has a lot of proteins in it. I have egg whites and pulses in particular.

What are your career plans?
I want to see myself as a director so I'm working towards it. But that does not mean I'm leaving acting it's just a wish which I want to see being fulfilled.

Do you want to do films?
Yes of course I would love to do a film its one of my dreams to be a part of a good film.

paarul 10 years ago Neil u r awesome..a perfect combi of looks and talent

paarul 10 years ago neil u r the most amazing actor i have ever seen.Luv u neil

sayhi2nimi 10 years ago Neil u rock , the most wonderful actor on TV !!!

sayhi2nimi 10 years ago Neil its only U and smiriti who rock KB!!!

sayhi2nimi 10 years ago neil u were just superb with all your expressions sterday,amazing performance ,u r tension ,u r fear ,every one was outstanding.

sayhi2nimi 10 years ago neil u r amazing actor no one could have carried the role of abhi so well,so its only u u u u and u!!!!!

sayhi2nimi 10 years ago neil your acting is superb as always rocking dude!!!!