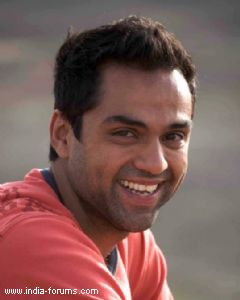 At the 20th Annual Life OK Screen Awards held on Tuesday night, Abhay Deol arrived with a swollen eye and when asked if he was alright, he said, "No, I am not alright. My film is releasing Jan 31. My music has not yet released because the music company wants me to get the composers Shankar Mahadevan -Ehsaan Noorani and Loy Mendosa to sign a clause which is illegal."

He openly named the company and said he has suffered the loss and the music is not available anywhere.

Abhay stars alongside girlfriend Preeti Desai in the film.

"Let's see what will happen, they are not marketing my film, the music is not on the radio also. What else can I do?" he added.

Abhay will soon hold a press conference about the issue.

"It is an issue of copyright. I will talk about it after first talking to Shankar, Ram Sampat, Vishal Dadlani - Shekhar Ravijani, they are all with me. The music industry is supporting me, let's see if the actors and producers will," he said.

"One By Two" has been directed by Devika Bhagat and also stars Rati Agnihotri, Lilette Dubey and Darshan Jariwala.

+ 3
7 years ago Oh Abhay.. we hope your problem i solved.. i watch every single movie of yours.. I think you are one of the most talented actors we have today a natural actor.. ..