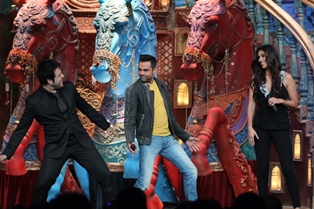 The recently shot episode of the most popular comedy show on Sony Entertainment Television Comedy Circus Ke Mahabali was an engaging one. The occasion was the presence of real life couple Abhay Deol and Preeti Desai  who made a special appearance on the show to promote their upcoming movie One By Two.

Both these actors were hilariously entertained while on the shoot. Contestant Krushna Abhishek as always was in his wittiest best and greeted Abhay in an extremely unique way. Krusha was seen teaching him how to rock like a complete rock star (Abhay's character in the movie) by showing him some dance steps on the song 'Pakao' from their film.

Abhay and Preeti were in complete awe and were in splits when one by one the Comedy Maharathis took to the stage exhibiting their funny flair.