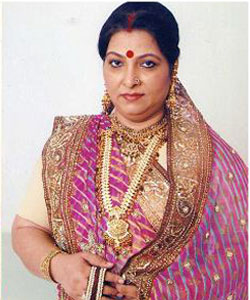 With the buzz about Bhagonwali - Baante Apni Taqdeer coming to an end, it's time for some characters to return to the show to bid a proper adieu,

A source reveals, "Abha Parmar, currently essaying Bua in Star Plus' Iss Pyaar Ko Kya Naam Doon?, will return back to Bhagonwali - Baante Apni Taqdeer. The production house has agreed on her return to the show for a few days as Bhagonwali is on the verge of closing shop."

"Chachi and family will return to the screen as a rich family. They made an exit from the show as a poverty stricken bunch but will now return as a well-off and consoling family for Runjun (Nivedita Tiwari)-Guddu (Himanshu Malhotra). She will get back to Iss Pyaar Ko... as soon as her track in Bhagonwali ends," adds the source.

We contacted Abha Parmar who confirms, "Yes, I will be re-entering the show soon. I will begin shooting in the next couple of day."

9 years ago Welcome Chachi...Cant be happy because BBAT is ending...

9 years ago Buaji come back soon. You really rock the show.

9 years ago May be the current actors in Bhagonwali (like tipi, tillu, kukkan , Aghori etc ) declined to do any more scenes out of despair..so they have to go for other option...btw, welcome back Abha Ji in Bhagonwali..ouch..typo..had to edit...

+ 2
9 years ago Well atl least I hope the Ending is a proper one. The show in it's closing days has become a waste of such potential of it's factors (specially the leads who hav amazing acting capabilities) Let's just hope now the ending proves to be beautiful and memorable!

+ 8
9 years ago Buaji u rock now a days!so will miss u!come back soon!cz ur Hai re Nandakishor will be waiting for u too!!