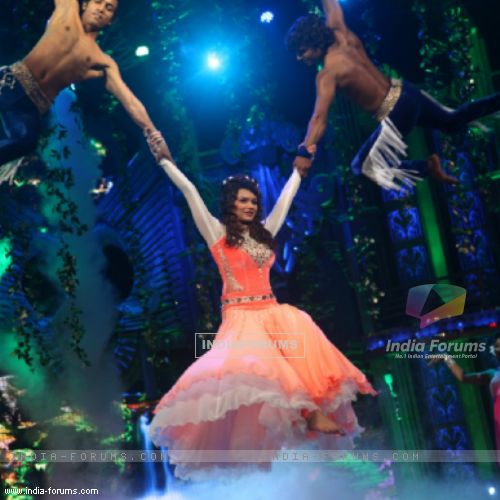 We hear that Aashka managed to match up to all the contestants as she did everything from gymnastics to an aerial act without harnesses. Ask Aashka about her act and she says, "It was a challenging act but I loved it. Initially it was definitely difficult for me to perform these stunts, acrobatics and to swing in the air while dancing but the contestants were so cooperative and upbeat about performing together that their positivity got me going.  Its been a lot of fun performing with them as they are immensely talented."

We hear that judges Farah Khan and Anu Malik were surprised to see Aashka dancing so well and matching the daring acts with the contestants on the show.  Whoever said being a jack of all trades is not possible must have not met Aashka as not only is she seen on television in the avatar of Maharani Bhatiyani on Bharat Ka Veer Putra - Maharana Pratap but she is also hosting a finance based show called 'Get Rich with Aashka' on CNBC Bazaar.
10 Likes

Bhawana01 6 years ago Aashka is very talented
She looks beautiful in that dress :)

bitblue 6 years ago she is beautiful and she does DB role so good as soon as i see her on screen my mind starts thinking something is going to be wrong :).

anjoriii 6 years ago Loved your performance! You look beautiful! :D

_NeverMind_ 6 years ago Aaskha you looked beautiful in that show.