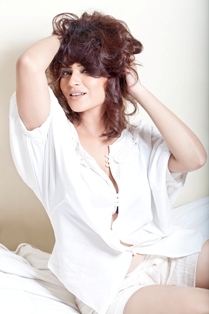 Actress Aashka Goradia's love for criminal psychology seems to go hand in hand with the latest role she has bagged of a public prosecutor in Sony TV's Adaalat.

Aashka who is currently seen essaying Maharani Bhatiyani in Bharat Ka Veer Putra - Maharana Pratap has played a lawyer once before in Saath Phere.  Ask the actress about it and she quips, "I love playing the role of a lawyer because as a kid I always thought I would become a criminal psychologist since I love the genre of crime and mystery.  Also for me as an actor it's going to be interesting playing the role of Maharani Bhatiyani on a historical show and then switching gears fighting Ronit Bose Roy on Adaalat.  I am beyond excited to be working with Ronit as he could be such a great mentor to anyone.  We have worked together in an ad before but it's the first time we will be doing a show together.  I am really looking forward to it."

The actress seems to be in demand, as she will be shuffling between two shows simultaneously!

Shaina_b 6 years ago Looking forward to seeing her as a lawyer!!!!

Rozy77 6 years ago really looking forward to seeing aashka in adaalat with ronit :))

MriduB 6 years ago Thanku for the article IF! :) Ronit Roy u rock as KD Pathak in Adaalat! :D

Mages 9 years ago singam is my fav movie...surya rocked in the movie....i hope they don't make a joke out of the movie...

mahalcdiva 9 years ago wow..... this is definitelty a happiest thing.... but am sure Ajay can do gud but not best than Surya.... This is indeed a great oppurtunity to Kajal....

x.sunayna.x 9 years ago OMG ! Kajal Agarwal so glad she's going to be in it :)

jassie_17 9 years ago what is with him and burning up or doing stunts with cars??

samicute 9 years ago thank for the awesome information