Zee TV is all set to launch two new shows in prime time slots from the first week of June, one being Balaji Telefilms' Pavitra Rishtha which will be aired at 9 PM slot and the second is Drishtanth Production House show Aapki Antara which will be aired from June 1st at the 8.30 PM slot. 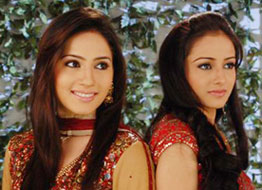 Featured Video
With this, Zee's long running show Maayka, produced by Creative Eye which presently occupies the 8.30 PM slot is put under the radar, and it seems as though there are 50-50 chances of the show either going off air or getting a new time slot.

We called up Ajay Bhalwankar, Programming Head, Zee TV on the same, but he said, "I cannot comment on Maayka right now".

We tried digging more into this, and called few actors who are part of Maayka. Neha Bamb who plays Mahi categorically said that the show cannot go off air as of now, "I think it will be shifted to the 8 PM slot which is getting vacant soon". Kanchi Kaul who essays the role of Soni too gave a similar answer.

Jayati Bhatia quotes, "Dheeraj ji told us that the show has got an extension till December. As far as I know, Maayka may shift to the Dulhann slot, but nothing is confirmed yet".

All our efforts to get in touch with Dheeraj Kumar of Creative Eye, were in vain..

However, according to our source, "Maayka might most probably get shifted to the 8 PM slot as of now. In months to come, there are chances of the show going off air, with the much-awaited historical Rani Lakshmi Bai of Contiloe taking its place".

However, to add to the confusion the buzz is that Dulhann which has now bagged an extension of four episodes might be on air till August, if things go one well.

When we talked to Divyanka Tripathi about the probable extension, she was rather surprised and said, "I am aware about the four episodes stretch. I was informed of this just yesterday by my production team. I readily agreed to it, as I had to give an extra of just six more days. But I am totally unaware of the longer extension which you are talking about. With Sharad not there, wonder how the creatives will manage to come up with an interesting story line if they do get this extension".

Kamya Punjabi also verbalized the same, "We will now be shooting till May 22nd, and the last day of airing will be on 28th May. I am not aware of any further extensions".

Well, the one thing we are sure of as of now, is that Aapki Antara is all set to take up the 8.30 PM slot on Zee TV from June 1st..

We need to now wait and watch to know what happens to Maayka and Dulhann in days to come..

balpreet.harvi 13 years ago What is this?!!! Every long running show of Zee is going off air! If this is the case Zee will end up like NDTV being left with 1 serial which is Black! Saat Phere & Dulhann is ending...soon Maayka. then god knows, betiyann, naaginn, choti bahu, shree & so on! This is stupit!

+ 5
13 years ago Maayka wont go off air as yet. Shahi just had twins and we would like to see them grow up a bit. Soni-Jeet problems also have to be solved.

+ 8
13 years ago Mayyka should be ending now, December is too long!!
the main ourpose of the story is over with.
looking forward to this new show.

13 years ago Thanks Zee could end all the show I don''t care. I cannot understand that the are ending Saat Phere when it got some new faces. Zee sucks

13 years ago i think untill now kasam se& dullhann is the best serial on zee.what is this show abt?