View Profile
If the latest buzz in television industry is anything to go by, then Zee TV and Drishtant Media's Aap Ki Antara will take another leap in the next month. 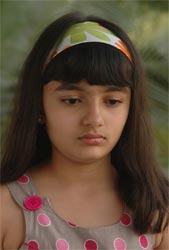 Featured Video
According to our source, "The main issue that had to be tackled in this stage of the show was Antara's puberty. But given the current audience the makers are unsure if this particular topic would be received well. A few days back, the molestation sequence was shown, wherein a guy was shown trying to molest little Antara. However, it failed to bring an improvement in TRPs. This has caused them to re-think if the audience is truly ready to see Antara tackle the harsh difficulties of her life."

Adds the source, "Puberty is one of the most important issues that an autistic girl has to deal with. Therefore, the issue hasn't been chucked completely. The issue will be dealt through talks, that is, the adult Antara will be shown talking about how she dealt with puberty. It will be shown that Antara has become a much self-reliant girl when she reaches adulthood."

The source further tells us, "The cast of Aap Ki Antara will again have a total change. Prabhleen Sandhu who was unhappy playing mother right after the first leap is most likely to quit when the show plunges into the next phase. In that case even the face of Antara's mother will change."

If the makers go according to plan, then Aap Ki Antara might in all probability see the next generation leap being taken in the month of February. Antara will then be showed as a teenager facing new hurdles in her life.

For the uninitiated, Aap Ki Antara which was earlier doing well at the 8.30 PM slot was moved to the not-so-convenient time of 10.30 PM, after which there has been a gradual dip in the ratings of the show. Presently, the story line is focusing on Aditya's fight against the terminal illness of cancer, but according to his reports, there seems to be a little ray of hope for his survival.

We tried calling Producer Monish Sekhri, and even sent him a text message, but he remained unavailable.

Seems like the dwindling TRPs have forced the makers of Aap Ki Antara to fast-forward towards a logical conclusion than face the fate of ending it abruptly.

+ 5
12 years ago :@ aadaa this isnt an ekta show...
they shud end it or entirely focus on autism rather than making it a family drama

+ 3
12 years ago yeh this shw was awesome during its forst phase.

12 years ago no offense to anyone..bt i think its time they just end the show..i think a lot of people have been educated about autism and now the show is more like a family drama..i am thankful that they had this show because I have learned a lot about autism..i think they have done a great job but now it should end for good and hopefully another good show can come on.

12 years ago man they turned this show into a peice of crap why, why it had really good actors in the first place why the need, en logo ne apne paher pay kudh kulardi mari

12 years ago Have these people not learnt from 'Kis Desh..' experience, that leaps do not improve TRP's., infact leaps expediate the decline in TRP's..I think that when TRP's start to fall, then it is a time to call it a day and start a fresh new show, you can still use the same crew and most of the actors from the axed show.!!Maybe Mr.R.Shahi & Ms.E.Kapoor should consider this for Bidaai & kis desh..

12 years ago it might be good... but i watch pyar ka bandhan on that time... they need to change the timings...

+ 5
12 years ago another leap? oh gosh i dnt think they shud hav leaped in the first place...preferred the 1st antara