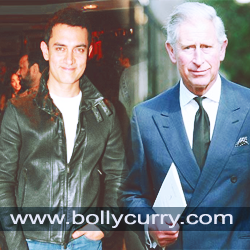 Bollywood's Mr. Perfectionist, Aamir Khan and his wife, filmmaker Kiran Rao have apparently been invited to dine with the Prince of Wales and his wife, the Duchess of Cornwall, Camilla Parker Bowles at the Marlborough house in Westminster, London.
If sources are believed, Aamir accepted the invitation and is highly honored to join the Prince for cocktails and dinner held especially for a selected few.
The actor will be in Toronto on September 9th for the Toronto Film Festival for the expected screening of Kiran's film, Dhobi Ghat. After that, he is to fly to London for the UK release of Peepli Live scheduled for September 24th.
This will not be the first time the Prince has dined with our B-town celebs. One cannot forget the sparks created when the yesteryear's heroine, Padmini Kolhapure kissed the Prince. The on-screen badman Gulshan Grover too aggrandized when he had his chance. Now it's time for Aamir to stake his time out!