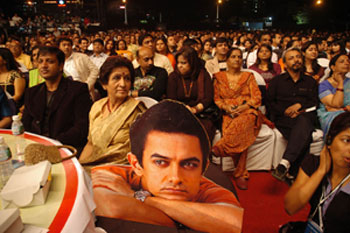 Bollywood actor Aamir Khan is known for his firm beliefs as far as work is concerned and is also famous for not attending award functions because he believes that they’re all rigged. At the recently held Nokia 14th Star Screen Awards (to be aired on Star Plus on Jan 27, 7 30 pm onwards), the organizers placed a huge cut-out of Aamir Khan from the film Taare Zameen Par to make up for his absence at the function.

Aamir’s latest release Taare Zameen Par bagged 17 nominations in the award function. Conspicuous by Aamir’s absence, the organisers still wanted the audience to feel his presence and hence each time his name was announced, the camera would move to an Aamir cut-out placed in the audience for his virtual presence. Host Sajid also ended up making a dig at the actor’s nonappearance during the award ceremony.

Remember to tune in to STAR Plus for all the excitement of Nokia 14th Annual STAR Screen Awards on Sunday, January 27th, 7.30 pm onwards.
Featured Video

Secondly, i guess he's right in some ways but i really wish he was there to pick up his awards...

+ 5
14 years ago Awwwwwww.... Aamir should of went but then i guess beliefs r beliefs n cnt b broken easily!

+ 2
14 years ago Aamir deserved this award, m really very happy for him.
u rock Aamir.

+ 2
14 years ago i am so glad...tzp bagged 17 nominations..dat is a staggering number...i hope darsheel wins for the best child artiste or better still..for best male debut..lolz..his performance has to be d best performance of this year...and i hope aamir khan wins in best actor category too

and i am so so glad that both aamir and shimit won for tzp and chak de...both debutante directors were d deserving ones....

gr8 going Aamir...u always r the best in watever u do!!

14 years ago Awesome!! Both TZP and CDI deserved it!!!