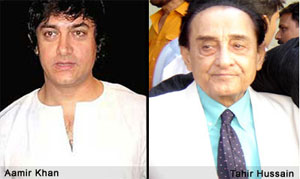 Bollycurry brings you the shocking news that actor Aamir Khan's father Tahir Hussain has passed away at age 79.

The reason for Tahir Hussain's death is attributed to heart attack. According to current reports, Aamir is on his way back to India from USA. He had been there with wife Kiran Rao to attend the Sundance Film Festival where his film Peepli Live was premiered.

Tahir Hussain has contributed a great deal to Bollywood as a writer, director, actor and producer. He is the brains behind popular movies like Hum Hain Rahi Pyar Ke (1993) featuring son Aamir, Zakhmee(1975) and Anamika(1973).

What's saddening is the fact that Tahir Hussain and Aamir never got over their differences which crept up due to Aamir's brother Faisal's unsteady psychological condition. Aamir and his family had issued an official statement to the press condemning his father and brother's allegations against him in which they expressed their 'utter shock, disgust and contempt at the public statements of Tahir Husain and Faisal Khan'.

Hi body for now lies at Leelavati Hospital and the funeral will be conducted tomorrow as soon as Aamir arrives.

Tahir Hussain is survived by his wife Zeenat, sons Aamir and Faisal and daughters Farhat and Nikhat.