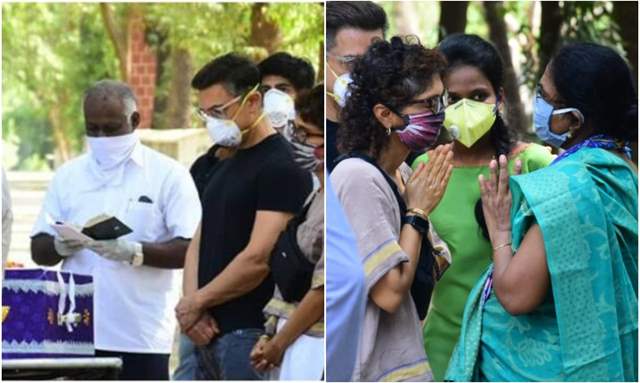 Actor Aamir Khan’s personal assistant Amos Paul Nadar passed away on May 12, Tuesday. Amos served Khan for the last 25 years and passed away after suffering a heart attack. His untimely demise has caused distress to Aamir and his wife Kiran Rao as they were very close to him.

Aamir Khan and Kiran Rao have now arrived to attend the last rites of Amos, held in Mumbai. The celebrity couple attended the small gathering in Paul Nagar area to pay their respects to the family. The duo can be seen wearing masks in accordance with the COVID-19 regulations.

Aamir's close friend and Lagaan co-star Karim Hajee stated that Amos collapsed and was rushed to the hospital by the actor, his director-wife Kiran Rao and their team. He added that  Amos had recently turned grandfather and his death is a huge loss to his near and dear ones.

"He had no major illness, his death is shocking. He died with his boots on. Both Aamir and Kiran are devastated. Aamir had sent us a message and said it is an irreplaceable loss. We were so numb, we will miss him," Karim said.

Amos is survived by his wife and two children.

'We are Passing Through a Tough Stage': Aamir Khan- Kiran Rao have ...