View Profile
As reported earlier, ace actor Aamir Khan is all set to make a break through in the television industry. The show 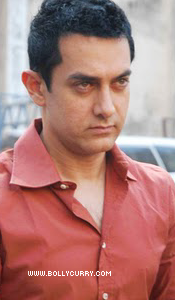 tentatively titled Mera Bharat Mahaan, is said to be based on the lines of the flagship chat show, The Oprah Winfrey Show.
Reportedly, the initial shoot for the maiden episode grew pretty autonomous when the people on the sets saw their host - Aamir - breaking down again and again during the course of the show. Sources reveal that for the sake of spontaneity, Aamir had avoided prior meeting with the guests of the programme and thus his reactions came naturally.
A source from the sets stated that the shoot for the first episode passed by quite emotionally as Aamir broke down quite a few times, resulting in taking many breaks to return to his normal self. However, it was not just him, apparently many from the set and audience let loose a few teary drops, leading to the atmosphere being very charged up yet remaining somber. And throughout all of this, Khan's wife, Kiran Rao, was on stand-by to support hubby even though not being a part of the creative team.
For the records, the title 'Mera Bharat Mahaan' had already been registered by Ekta Kapoor's Tele-films, but on the modest request of Khan, the telly queen graciously allowed the title to be used!
For those excited, there's still some time for the show to hit our screens but the interim, Khan can been seen in a villainous role in Dhoom 3 and Reema Kagti's untitled next!
Mr Perfectionist has been loved by one and all on the big screen, but can he spread the same charm on the viewers of the small screen?
Editors: Hershi & Jenifer
Graphics: Sano
14 Likes