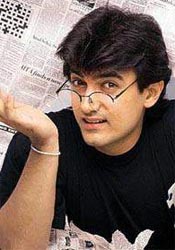 Aamir Khan is on cloud nine these days. The reason lies beyond 'Ghajini' proving to be a box office hit. Soon Perfectionist Aamir will be Papa Aamir, once again. Aamir's beautiful wife, Kiran Rao is expecting the duo's first child. It has been said that director is three months pregnant. The couple did not want to disclose this information but had no choice when Kiran was admitted for a fever in Breach Candy Hospital located in South Mumbai.

However the fever has been treated and Kiran is perfectly fine. Aamir being Mr. Perfectionist in films is also carrying out this title in real life. Aamir is taking extra take of Kiran and makes sure her needs are fulfilled.

This will be Aamir's third child. He has two children, Junaid & Ira from his first marriage with Reena which happened in 2002.BollyCurry extends the best wishes for the new parents to be!
Featured Video