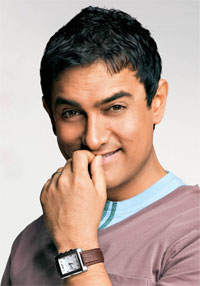 The 70 seconds commercial will show half of Aamir as a Punjabi girl, and the other half as a boy.

It is the first ad by Aamir after he became the company's brand ambassador. It will go on air from Monday.

'We are proud to have Aamir working on the ad and happy with the outcome of the final product. No other actor could have done the same so effectively,' Vikram Mehra, chief marketing officer, Tata Sky, told IANS.

'Many people didn't know that in Tata Sky - Sky stands for the company which is the biggest player in DTH technology in the world market.

The ad has been conceptualised by the company's marketing team along with Rediffusion. Bollywood writer-director Neeraj Vohra has directed the ad.