Aamir Khan sure is lucky. The actor is the only one allowed to have a sneak peek of megastar Amitabh Bachchan's startling new look in his forthcoming film ' Paa', but he was of course sworn to secrecy.

Aamir paid a surprise visit last week to the Big B at Film City here while he was shooting for R. Balakrishnan's 'Paa' that also stars Abhishek Bachchan and Vidya Balan. Visitors are strictly not allowed on the film's sets, but Aamir was soon escorted to Amitabh's make-up van. 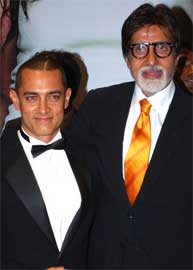 Featured Video
Balakrishna, who is popularly known as Balki, is paranoid about his leading man's looks being leaked out and he swore Aamir to secrecy.


'We don't allow a single visitor, not even close relatives or friends of crew members on the set. Phones of course are a complete no-no. The next thing you know the look will be splashed on the net. Aamir of course couldn't be turned down. But yes, we did swear him to complete secrecy almost like a boy scout's cross-your-heart kind of pledge,' Balki said.


'We can't afford to take any risks. If Mr. Bachchan's look leaks out, the plot is out. In any case Aamir is a man who understands the exigencies of cinema. He will hardly be expected to leak the look out,' he added.


Amitabh's make-up is being done by none other than Stephan Dupuis, who did Robin Williams' make-up in 'Mrs. Doubtfire'. And he takes a good four hours to get the desired look.


While Aamir got a look at Big B's unique never-before look, Sanjay Dutt and Ranbir Kapoor who dropped in the next day were not that lucky. While Sanjay met up with Amitabh when he was not in his special get-up and costume, Ranbir had to be turned away after being appeased by a photograph of the Bachchan senior's look.


Balki, who has earlier worked with Amitabh in 'Cheeni Kum', says he will soon move the shooting of 'Paa' to Malaysia to protect the actor's look from prying eyes.


'We really can't take any risk about Mr. Bachchan's look. Once people get to know what he looks like the plot will be given away. This is why we are immediately shifting location to Malaysia, not because we require a foreign location. But because we need to shoot without the fear and embarrassment of visitors,' the director said.