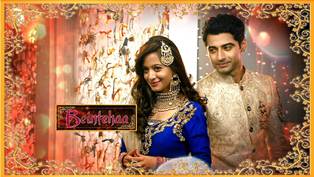 After the tragedy which has happened with Usman (Naved Aslam), in Fortune Productions' popular show Beintehaa on Colors, the viewers will witness some more drama in its forthcoming episodes.

Our source says, "Everybody is shocked and shattered to see Osman's condition and Zubbu's arrest. Aaliya (Preetika Rao) goes to meet Zubbu and she feels that he is innocent and she tells the same to Zain. Further, Rehaan enters the station as a defense lawyer who comes to meet Zubair (Mohit Malhotra). He is informed by the officers that the Government has appointed a lawyer for him so Rehaan will fight the case for him. Zain (Harshad Arora) is shocked to know that Aaliya is still supporting her cousin Zubair and is going against his family."

"As Shazia (Namrata Pathak) is known for planning and plotting she blows things out of proportion and breaks it in a big way in front of Suraiya (Suchitra Pillai), Fahad (Vivek Madan) and others that Aaliya intends to save Zubair who is put behind bars for attempting to kill Usman Abdullah. Aaliya who is trying hard to save Zubair gets to know that he has been given the lawyer by the Government. Aaliya and Rehaan come face to face when Aaliya reached the station," ends the source.

Will Aaliya and Rehaan succeed in proving Zubair innocent? To know more keep reading this space.

surbhi_005 6 years ago Love Zaya Foever...
Harshika n Zaya made for each other...

Shuguftahussain 6 years ago love zain and Aaliya...
you both r made for eachother...

lachu.sree 6 years ago Excited...
Love to see zaya together...
Harshad Arora & Preetika Rao are the best...
Made for each other...
Keep rocking Guys...
Love Beintehaa

lachu.sree 6 years ago sooo much in love with Zaya...
Love the chemistry of Harshad Arora & Preetika Rao...
They are just made for each other...
Excited for the upcoming track...
Keep rocking Beintehaa...

N.K.R. 6 years ago Preetika Rao and Harshad Arora are awesome and amazing in Beintehaa!

sunshine_love 6 years ago Love Beintehaa So Much
Keep Rocking Harshad & Preetika Beintehaa Is Doing So Well!!!