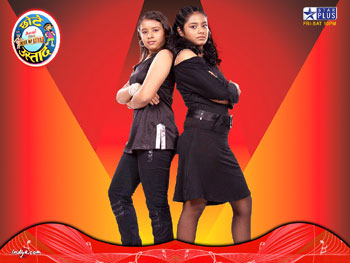 The stage is all set to witness yet another close contest between two musical prodigies!! After weeks of nail biting moments into Scaryland and back into Fairyland, Anwesha Dattagupta and Aishwarya Majmudar's dreams and aspirations to be the most sensational Bollywood's playback singers will finally be decided on Saturday, 5th April at 8 pm (Live) only on Star Plus!!
The finest of singing talent and the first two female finalists ever on an Indian TV reality show, Anwesha and Aishwarya vie for the most prestigious title of the season as they contend for the title of Amul Star Voice of India's Chhote Ustaad. The judges Shreya Ghoshal, Kunal Kanjawala and Pritam Chakraborty also wonder who amongst these two voices will win the title. Their fate rests in the hands of the Indian audience.
Last week saw the grand homecoming of Anwesha Dattagupta at Kolkata. This week, the Chhote Ustaad team traveled west, to the city of our Stylebhen Aishwarya Majmudar. Needless to say, both the girls received an ostentatious welcome from Aishwarya's hometown. Present at the event to cheer the girls, was Bollywood beauty Bipasha Basu who added more spice to the occasion with her enchanting demeanour and encouraging words. With her hit number No Entry playing in the background, Bipasha was given a grand welcome by host, Abhaas Joshi.
Maintaining the flavour of Gujarat, Abhaas began the episode with Dhol Baaje (Hum Dil de Chuke Sanam. Aishwarya followed suit with a rapturous performance of "Hey Rang Lo" (A Gujarati Folk Song). Anwesha was not one to lag behind in delivering flawless performances. This time, our Banglar Gorvo, adorned in a gorgeous Gujarati attire delivered a flawless rendition of Kem Chhey (Jis Desh mein Ganga Rehta Hai) in true Gujarati Spirit. Being thick friends, both the girls proved through the last two weeks that they could perform well in each other's mother tongue just as in their own in the true spirit of national integration. Besides the judges, they had Bipasha Basu swaying to their tunes. Shreya and Bipasha were thrilled by Anwesha's perfect Gujarati performance and appealed to the audience to support her Choti Behen from Bengal. The girls and Abhaas encouraged by the warmth she exuded, sang Beedi Jalai Le (Omkara) for her and Bipasha definitely couldn't resist joining them on stage to shake a leg with them.
The event was entertaining with power-packed performances by Voice of India contestants Irfan and Mirande. Irfan sang Tu Hi Meri Shab Hai (Gangster), a song dedicated to Bipasha while Mirande performed Mind Blowing Mahia (Cash) for the Chhote Ustad finalists. There was also a segment in which the girls dedicated songs to their parents. The parents of both finalists said that they were very proud of their daughters as now they were called "Aishwarya and Anwesha's parents". Aishwarya and her father, Tushar Majmudar, also sang Ek Chatur Naar together which reflected the beautiful relationship they shared. A segment of the show was dedicated to the Gurus. Aishwarya sang Jaan-e-Jaan (Saawariya) for her Gurus and Kunal Ganjawala. Kunal said that this was the toughest song that he had sung and that Aishwarya had captured the emotions beautifully. Anwesha sang Dupatta Tera (Partner), another song sung by Kunal. Kunal and Shreya both blessed the girls and wished them luck in their journey ahead. Also, Aishwarya's Gurus made a vote appeal for both the girls.
The finalists are now geared up for a Face-off on 5th April, (9pm onwards on Star Plus). The musical evening will see performances by all the twelve Chhote Ustaads as they perform on a single platform in the presence of esteemed and senior guests like Bollywood Shahenshah Amitabh Bachchan. It's a moment that not only the judges are waiting for but viewers across India will watch with bated breath as to who between Aishwarya and Anwesha will walk away with the crown.
Lets have a look at the odds.
Aishwarya Majmudar
Anwesha Dattagupta
Both have them have seen highs and lows in their performances during the weeks. But both of them have been thick friends and supportive of each other all along. Both the girls are singers par excellence and have left the judges and audiences spellbound by their divine notes. Both excel in their own styles and take music to a different level each time they perform. But who will take away the prestigious Chhote Ustaad trophy and the music contract with BIG Music???
Featured Video

+ 2
13 years ago Aishawriya is the best and i am sure she is going to win.

+ 2
13 years ago Both the girls are great.But If I must choose it will have to be

In one or two area one is ahead and in some area other is ahead...but both are equally talented...

+ 3
13 years ago BOth the kids are great singers and both are very sweet. Whoever wins is the win for music and in future both will do extremely well...

+ 3
13 years ago Good luck to both. Keeping all odds aside would say both the girls are fantastic singers and have a very bright future.

To comment - Let the best one wins - would be wrong here because both are good. Anyone's victory would be the victory of the music.

13 years ago OMG its soooo nice to see 2 girls deck it out in the finals.

13 years ago Both are gr8!!! its realli hard to choose