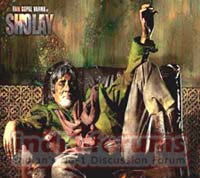 It's not just the theatre-going audiences, even the piracy industry is not interested in "Ram Gopal Varma Ki Aag". The much-hyped film, which released this Friday, disappointed one and all. Reportedly, the pirated master print of "Ram Gopal Varma Ki Aag" went for a record low Rs 50,000. In comparison, the Shah Rukh Khan-starrer "Chak De, India" sold for Rs 10 lakh. Even, "Heyy Babyy" went for Rs 6 lakh and "Victoria No 203" for Rs 1 lakh.

Shakeel Ahmed, a dealer in pirated film prints, says: "The disastrous reports in the media sent the bid for the film's master print tumbling from Rs 15 lakh to Rs 50,000."

Thankfully, since the "Aag" DVD will have two other movies in it, sales won't suffer much because of the poor show of RGV's version of the superhit "Sholay".

The acclaimed film-maker and all remake makers must learn a lesson from the debacle. Hope, "Sholay III", if it ever comes, doesn't fall flat on its face the way "Aag" did.