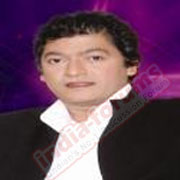 He is called Nayaab Naghmon Ka Badshah in the musical talent hunt "Voice Of India" on television, thanks to his hit film songs. Now the music-maker, who claims to be one of the few original composers in Bollywood, has teamed up with rapper Wyclef Jean for bigger projects, starting with an album.

As of now, Aadesh is providing symphonic embellishments to a song that Norah Jones recorded for Wyclef. He would also be contributing to a track by Shakira that Wyclef will record soon. The latter is scheduled to make a trip to India this year for filming the three music videos with Aadesh, who has reportedly convinced him to bring Norah along.

Up next in Aadesh's kitty is the score for a Hollywood movie to be produced by the makers of "300". Then there is Uru Patel's "Hanuman".

However, there is one wish that Aadesh feels would be a bigger reward than working with such internationally renowned musicians. He wants Lata Mangeshkar to lend her voice to the album he is working on. Hope the evergreen melody queen says 'yes' and adds a feather to Aadesh's cap.
Featured Video