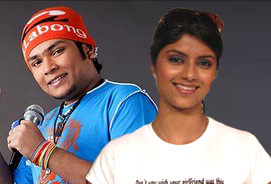 “The very consistent performers Aneek Dhar and Sayantani Ghosh along with Abhishek Awasthi and Meenal Jain found themselves in the danger zone this week. In the face-off, Abhishek and Aneek performed in which Aneek lost by a difference of just one mark, thus elimination Aneek and Sayantani from the competition!”, says our source.

Another well-placed source from the sets informs us that, “Aneek Dhar will be anchoring Zee Bengali SaReGaMa which he had won previously. Now that the shooting dates of the show were clashing with Aneek’s long run in Ek Se Badhkar Ek, the jodi of Sayantani and Aneek irrespective of their consistent performances were shown the door”.

With the battle now heating up between the 3 jodis, Abhishek – Meenal, Kushal – Sanchita and Jasveer –Raja, we can surely be assured of more drama, tough competition and some mind-blowing action in Zee’s Ek Se Badhkar Ek!!

To note, Zee’s Ek Se Badhkar Ek will be shown every Saturday and Sunday at 8pm instead of 7.30pm.

14 years ago Sayantani is such a great dancer... sad to see her go.

+ 2
14 years ago this was my fav team! Granted both had some attitude issues but Aneek was an amazing singer and Sayantani was the only really good dancer other than Abhishek. I think Raja and Jassi should have left 3-4 weeks ago...they SUCK!!!!

14 years ago They were my favorite! Abhishek is good but Meenal is pretty bad. If you look at the jodis as a whole Aneek and Sayantani were both awesome. This is totally unfair. Abhijeet's favorite is Abhishek so he didn't give Aneek a higher mark.

+ 4
14 years ago Yayyyyyyyyy.;...Sayantani was soooooooo annoying