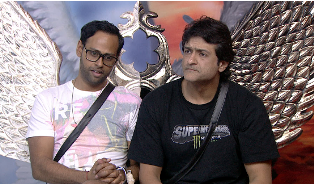 Facing the nominations procedure is the toughest thing that the Bigg Boss contestants have to undergo on a weekly basis. While there are a few of them who have complete clarity regarding who they would want to see evicted, there are others who get influenced easily and change their votes.

With Bigg Boss entering its 11th week, the game is getting tougher and more competitive. Owing to this, Bigg Boss has decided to bring in a twist in the nominations process and for the first time introduce joint nominations in groups of two.

Kicking off the process in the morning, Bigg Boss asked all the housemates to divide themselves in pairs and remain handcuffed till nominations were complete. However seeing that the contestants were sticking to their friends, Bigg Boss decided to make his own pairs based on the equations that the contestants share with each other. In fact, VJ Andy and Armaan Kohli, who have opposing views and personalities, were paired together, and the ever-warring duo Tanisha Mukherjee and Gauhar Khan were put together. Adding to this, pretty girls Elli Avram and Sofia Hayat were paired together and to incorporate some fun into this, the duo wore identical clothes and called themselves the BB twins'.

The pairs were then asked to go inside the confession room one after the other and pick three names for nominations with mutual consensus and were also allowed to nominate each other. Kamya Punjabi being the captain of the house was asked to overlook the task and also openly nominate one person using her special power.

With these imperfect pairs having to undergo this procedure together, will they be able to forget their differences and arrive at a decision?

sanal 6 years ago waiting to see whom tanisha and gauhar nominated...

zara_11 9 years ago Seriously, i don't think Sara's family would do that, but who knows? And as for the last sentence, i guess we can just wait to see who that person is.

Never thought I would be dancing, I was preparing to be an ...
48 minutes ago