The 10th of October was indeed a very emotional day for Mamta’s Anand Suryavanshi. Not only it was the last day of shooting in Mamta, but also, this was the first time he was sharing screen space with his daughter – Diza. After many highs and lows, Zee finally decided to end the show, due to poor TRP ratings. As the show winds up, the last episode will focus on a new entry – the new Mamta, (Gagan) and Sanjana’s (Neeta) daughter. The little Mamta is played by none other than Anand’s daughter – Diza. This is the first time that Anand shot with his daughter, and it being Diza's first on screen appearance,coupled with it being the last day of Mamta, it was definitely one emotional day for the actor.

Featured Video
“It’s been such a weird day, yes I am sad that Mamta is ending, because I was a part of it for such a long time, but then again it just had to. But today, I am just so overwhelmed. I am shooting with my daughter for the first time, this is like our first on screen appearance, and it’s just so touching. The story is such that after the Tanisha and Akshay incident, there is a two year leap, and Krishna and Sanjana have a daughter, who is named Mamta, and everything is back to normal, Diza, my daughter is playing the little kid…” says Anand. Apparently, the production house needed a little girl for the last scene, and they approached Anand for Diza, to which Anand immediately agreed. 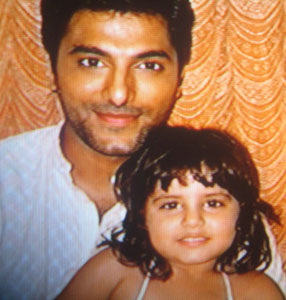 When asked how the day was on the sets with Diza around, he replied, “Oh, it’s been fun, she is having a gala of a time. She has been utterly spoiled with chocolates and ice creams by everyone on the sets. Everyone comes and takes her out, the whole day she’s been roaming around. It was fun shooting with her. It was just so touching to see my daughter acting with me, I am like, beyond words right now; I guess she is a better actor than me (laughs),exclaims Anand in his usual humble manner."

Well, it certainly must have been a mixed feeling for Anand as, the show he had been in, from day one was winding up, but at the same time, there was something to cheer about, because the serial ended with his daughter's entry into it.

Whatever it may be, the entry of the little Diza into the show will surely be a positive end to the serial Mamta, which started on a high, with the Little Krrish and his amazing screen presence. Post Krish’s exit from the show, Diza will now bring back the innocence in the show, thus paving the way for a nice and cute end to this tale of 'Mamta'.

Watch out for the cute Diza.. Will it be a future star in the making? Catch the last episode of Mamta tonight at 7:00pm only on Zee TV.

14 years ago omgg! Diza is just such a sweet little cutiepie!! Andy and Diza were just so cute together in the last episode!

14 years ago aww that cool!! they both look cute together.. i cant belive MAMTA is ending

14 years ago Awww, she is so adorable!!! That is so sweet, father and daughter acting together!

+ 5
14 years ago aww wow!!! she looked dif in the galaxzee of stars interview...anyway i think she's really cute

+ 3
14 years ago I had seen her when she was a toddler. I thought Anand looked like his screen dad in Mamta who is played this picture showing him older omg.. looks so much like Amit..

+ 5
14 years ago Thanks alot anju for nice Surprise..but can take another one you know this,hehe absolutely adorable..cutiecura..is thy name of diza.wow..i am so very excited and jumping up and down as i cant wait to see Father-Daughter duo on screen..brilliant..wonderful..
loved it..and thanks buddy :p