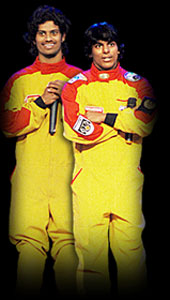 The Veto Power taken by Mithun Da last week in Zee TV's DID Doubles is partly nullified as one of the talented Jodis he saved has been shown the door this time around!!

Yes, the very popular Jodi of Prithvi and Vivek from Geeta ki Gang who are fondly called 'Dharti Putr' will be eliminated in this week's episode.

Our source states, "Cornell and Sakshi from Geeta's team bagged the highest public votes, and they happened to share the Best Performer of the week award with Sourabh and Vivek from Marzi ke Mastane. Remo D'Souza, the original mentor of the show was present as the celebrity guest to promote his upcoming movie 'Faltu'. The cast of the movie Jackie Bhagnani, Angad Bedi and Pooja Gupta also graced the show".

Jackie who is also a student of SDPA (Shiamak Davar's Institute of Performing Art) shared his experience of having learnt dance from Marzi Pestonji. On Marzi's request, Jackie performed on the latest number 'Chaar Baj Gaye'…

This week's episode is special for the fact that it brings together two great performers in Remo and Rajeev Surti to burn the dance floor. With a practise of barely few minutes, the hip hop specialists enthralled all with a mind blowing act.

Catch the disappointing elimination this week in DID Doubles..

shivani003 9 years ago This is the worst junta decision ever! :(

sreethu 9 years ago really disappointing
some times talent is shown door. that is not the end, because we cant stop the talent.
But every boby recognises the talent.
so all the best

Harp_95 9 years ago Cant wait to Remo and Raajeev performing together!!!! :)

angelanjali 9 years ago ohhh shit is this truueee no wayyyyy:(

im not watching DID now crappp

digitalone 33 9 years ago i think many are happy about this elimination
but this is not what i expected...............DID is also giving this shocks i dont know that but this is wrong elimination for sure

yipee 9 years ago i know very disappointing elimination...but so glad remo and rajeev will rock the stage together

Kangana Ranaut tried to mock Deepika, Sara and Shraddha for ...
5 minutes ago

Rhea Chakraborty did not name any Bollywood actors during ...
39 minutes ago