View Profile
A change from her usual roles, Priyanka Chopra has taken it upon herself to spice up her character in 7 Khoon Maaf
where she will be seen portraying a negative role. The actress is to be seen leading opposite seven well-known actors in the film, ranging from talented Naseeruddin Shah to hunky John Abraham, all of whom will be seen as PC's husbands. Set to release on February 18th, music for this film has been composed b 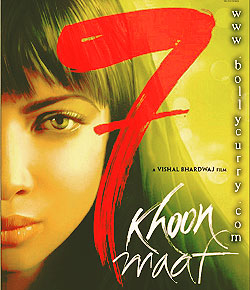 y Vishal Bharadwaj whereas lyrics have been penned by the famous Gulzar, so no doubt one holds high expectations from this duo. Here's what BollyCurry thought...
The album starts with the latest hit that has taken the music charts by storm, the frivolous "Darling". The unique combination of Usha Uthup and Rekha Bharadwaj as singers does play its effect in making all addicted to this song where listeners are left humming the melody even if the words don't stick! We cannot deny the Russian influence from where the tune has been picked but this sure is going to be one song played on all stations for days to come!
Next in line in the album is "Bekaraan" sung by Vishal Bhardwaj himself. The song starts out on a soothing tone that beautifully follows all throughout the track. Vishal's soft voice manages to attract listeners, pulling you in a trance like state due to its soothing effec but be warned, as soon as you've heard the song once, there's no going back!
"O Mama" is considered as the 'rock' number for this album. With the belting use of guitars in the background, the voice of K.K. and Clinton Cerejo definitely bring out the rocky feeling of this number. The beginning of the song starts out in an unusual soft tone but it's only for moments until the guitars are brought in, clearly waving a path for the rock genre.
The acoustic version of "O Mama", which is only sung by K.K., has a much softer start than the original version. In fact, the whole song heralds a soft tone with K.K. singing at a higher pitch accompanied by only the guitar in the background, which brings along a totally different tone to this song. This version is also significantly shorter compared to the original.
"Awaara" is the next track in line, sung by the deep toned of Master Saleem's voice. Although at first glance it might seem that this song might be soothing and slow paced, vibes of anything but soothing and calm are constantly sent the listeners way. There are mysterious tones that wonderously manage to creep up on you once just as you manage to dig deep into the song.
Starting off with a very soft beginning, the next track in this album is "Tere Liye" sung by Suresh Wadkar. Suresh's voice is the only saving grace for this song which has nothing particular to offer besides more slow background music. Even the lyrics manage to lose you after a while despite this being a 'romantic' song of the album.
The fast, rock based song "Dil Dil Hai", which starts right into the lyrics as soon as the song starts, comes next. Sung by Suraj Jagan, the only lyrics that manages to stay with you after the song completes is "Dil Dil Hai" due to the multiple times it is repeated. Other words loose themselves between the hard rock music and although this might be another rock-inspired song, it doesn't hold the same effect that "O Mama" held.
The soft and mysterious toned "Yeshu" comes next. A devotional number sung by Rekha Bharadwaj, the background theme is not only enticing but matches up to the tenor of which Rekha has sung the song. With a soft feel, the song gears up towards the middle where a chorus candidly joins Rekha. With simple music used, this song can definitely hold your attention for a while, especially during the collaboration between the chorus and Rekha.
"Doosri Darling", the last and final song. nicely wraps up the album. Another version of "Darling", this rendition has Clinton Cerejo and Francois Castellino joining the original singers Usha Uthup and Rekha Bharadwaj. Although it starts out as a fast paced song with Russian lyrics, the pace slows down a notch once the singers join before it manages to return to its original pace.
There you have it folks! With a mesh of interesting, if not a few unique tracks, the album is surely a treat to listen to the first time round. Although there are some songs that might get only one listen, we are sure that the favourite will get more that a few replays. Besides, Gulzars lyrics teamed with Vishal Bharadwaj's music can never be a let down. Those who have heard the album, let is know of your favs. Those who plan to, have a look of what we recommend below.
BollyCurry's favorite(s): Darling, O' Mama, Yeshu, Doosri Darling