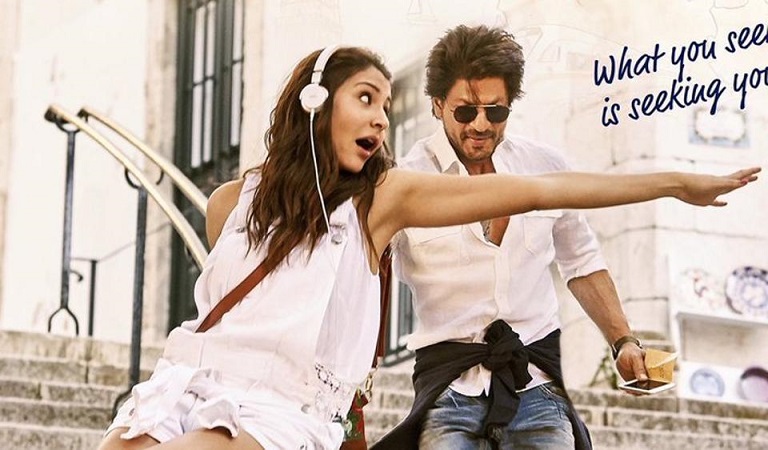 Team Jab Harry met Sejal are all set to deliver a party anthem with Beech Beech me the second song from the film.
Team 'Jab Harry met Sejal' has been on a promotional spree delivering innovative marketing strategies. The makers unveiled a series of 'mini trails' that highlight the personalities, complexities and dreams of Harry and Sejals.
Here are 5 reasons to watch out for Beech Beech me song:
1. Party Starter: Shah Rukh Khan and Anushka Sharma will be seen in Beech beech me which is been touted as a party starter. The song will have free spirited music which is sure to serve as a party starter.
2. Shah Rukh Khan- Anushka Sharma: Marking their hattrick at the big screen Shah Rukh Khan and Anushka Sharma will be seen exhibiting playful chemistry. The duo will be seen grooving to Beech Beech me as they let their hair down merrily.
3. Pritam's music: Music maestro Pritam who is helming the songs on 'Jab Harry met Sejal' will be delivering yet another party anthem post it much-celebrated party number in Ae Dil hai Mushkil.
4. Hook Step: No party number is complete with a catchy step. Beech Beech me will not only have the dancers burst out into a jing hut will also have the nondancers groove to Shah Rukh Khan-Anushka's moves.
5. Imtiaz Ali's direction: Imtiaz Ali is known to bring out the most vibrant sides of hiS actors in his directorial. Be it jab we met Love aj kal, Tamasha. Imtiaz Ali is known to treat his audience with evergreen party numbers. Beech beech me will further Imtiaz Ali's musical treats.
The 'mini trails' and the recently launched song 'Radha' from the film have left the audience in immense anticipation for the film to hit the theatres.
Presented by Red Chillies Entertainment, 'Jab Harry Met Sejal' is directed by Imtiaz Ali. The film stars Shah Rukh Khan as a Punjabi Harinder Singh Nehra and Anushka Sharma as a Gujarati girl named Sejal Jhaveri, 'Jab Harry met Sejal' is all set to release on August 4th, 2017.
0 Likes