Our good old Bollywood is evolving. New actors, new directors, new technology and not to forget, new fashion icons come up every year to enthrall the fans and audiences. In 2014, however, the reigning fashionistas held tight to their coveted fashion crowns. Reinventing their wardrobes, giving emerging designers a chance to showcase their work on them, experimenting with their looks, taking media critique seriously and stayed mighty reluctant to relinquish the public eyeballs to the talented second tier or hopeful debutantes. Since we all know that the business of looking good is not easy, fashion faux-pas still happened and there were many onetime wonders that captured our attention for full fifteen minutes. However, there were those divas whom shutter bags loved almost consistently. While others floundered, these names grabbed the lead in tinsel town's fashion parade. While bidding adieu to this year let's look back for a moment and give the top three tastefully dressed femme fatale of Bollywood in 2014 an ovation. A standing one, if you will.
Sonam Kapoor 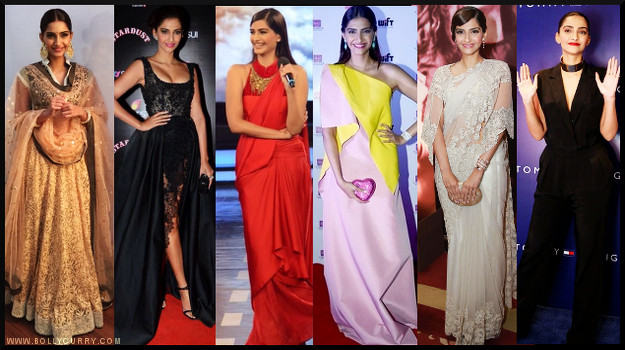 Bollywood's resident fashion diva, maintained her honorary place in the fashion charts this year as well. Before we start on the hows and whys of this choice of ours, let us tell you (in case you don't already know), risque, is Sonam's normal. She in fact rocked a few outfits, in which any another actress would have looked funny. But not Miss Kapoor. Be it a guest appearance on television, photo shoots, parties or promotions, this Kapoor prodigy kept wowing us at every turn throughout the year.

Kapoor looked ethereal in a beige lehenga from Kotwara by Meera and Muzaffar Ali's Bridal 2104 collection while promoting her film Dolly Ki Dolli at a dance reality show recently. She had looked equally fetching when she donned a black Elie Saab gown for this year's Stardust Awards. The red pre-draped Tarun Tahiliani saree in which she shook a leg with Arbaaz Khan and Bigg Boss host Salman Khan while promoting her latest flick, was too much perfection. Bringing admirers to their knees, almost, with the color block Roksanda Ilincic gown that she sported when attending Women in Films and TV event to judge a Women's Safety and Empowerment short film contest or reminiscing yesteryear heroines in the sheer saree with a matching caplet by Anamika Khanna that she wore for an event of the same designer, Kapoor was everywhere an ace. To add expert opinion Kapoor just didn't make hearts stop when she met the world acclaimed fashion designer Tommy Hilfiger in a Tommy T2T  black jumpsuit with a plunging V neckline, Mr.Hilfiger was enchanted too and expressed so as well.

And all this is just the tip of iceberg. Miss Kapoor has made it a habit to stay on the various best-dressed lists week after week. Thus, we declare her the Undisputed Queen of Fashion in Bollywood for 2014. 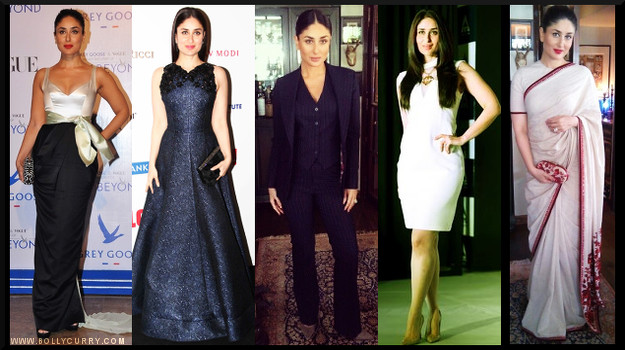 This Begum of Bollywood has an unparalleled class and style. She understands her body and face, and her fashion team is very competent as well. Kareena Kapoor had been promoting her films this year almost non-stop and we are yet to find a dress or a look of hers that killed our buzz. She definitely takes the award for being most consistently awesomely dressed female of 2014. Her love for solid colors and clean cuts, her favoritism towards artistically bound hair-dos, and her keen eye for accessory selection, is to be credited for her success on the fashion scene.
She followed close on the heels of the other Miss Kapoor in our best-dressed list week after week throughout the year. Any public appearance of hers was documented in Fashion Police's archive as a head turner. Her monochrome Prabal Gurung gown at the first edition of Vogue India x Grey Goose's Fly Beyond Awards was a fantastic choice. The Andrew Gn Pre Fall 2014 midnight blue gown with floral embellishments that we saw her wearing for Hello! Hall of Fame Awards 2014 was class apart. She even rocked the menswear look in the pin striped three piece Ashish N Soni suit at the Mint Luxury Conference. Kapoor was also spotted looking divine in a dress with mesh detail from The Source, in the brand color white for an event for Vivel. The simple cream Sabyasaachi saree with red border, heavily floral sequined pallu and an extremely conservative blouse she wore for the inauguration event of Reliance Foundation Research Centre reminded us of the glorious bygone eras of fashion.

We can go on and on and on, but let us assure you that you will not find any fault with how Mrs. Kapoor Khan turns up at the off-screen events. That makes her our second top choice for the Fashionista in Bollywood for the year 2014. 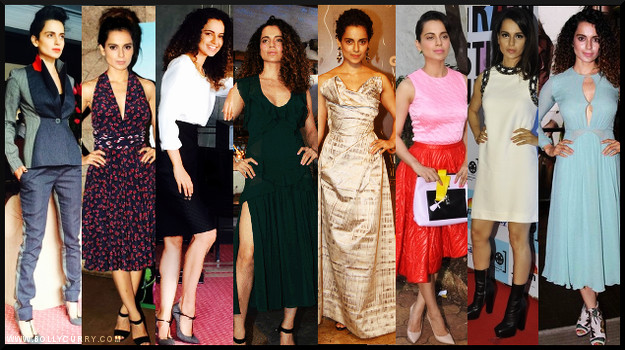 This sizzling actress who wowed all and sundry by her acting chops this year in her hit film Queen, also came up a winner in fashion department. She has got an innate sense of fashion, there is no denying it. But as someone who is known for outrageous hair-dos and make up on-screen, off-screen she shines in an opposite manner. Classiest cuts, muted accessories, simplest hair-dos, minimal makeup and a rather intelligent selection of designers is what helped Kangana Ranaut make to the top three of this list.

Recently however, she gave the simple look a rest and appeared for an exhibition in an androgynous look in a grey Dior Pre Fall 2014 suit, with flashy make up and pompadour hair, looking fashionable to the core. Back to her simple looks, the actress looked refreshing in a heartshape  printed Gucci halter neck dress and minimal make-up at film screening. She picked an emerald green ruffle-frill detail Burberry dress, for an event of a leading international private travel and lifestyle club. The monochrome Burberry ensemble Ranaut donned while posing with the Marilyn Monroe Lladro sculpture she received by Javier Molina was very classy and simple too. Attending GQ Men of the Year Awards 2014 in a classic corset fitted Vivienne Westwood gown, Ranaut received winning points from fashion police all over. She was looking like a doll when spotted at a meeting in a Dior look from their Fall 2014 collection with a pale pink quilted top that was paired with a burnt orange asymmetrical hem quilted skirt and a Dior bag added to the look. Giving any runway model a run for her money Kangana Ranaut ruled the red carpet walk of Mid Day's Jagran Film Festival event in a Little White Dress from Gucci's Pre Fall 2014 collection that had chain sequined detail on the neck and the shoulders. The actress unveiled her new Grazia cover wearing a beautiful blue dress from Burberry's Pre Fall 2014 collection.

And the list sees no end. Gucci, Burberry and Dior specifically seem to take majority of the space in Miss Ranaut's closet. If our ears were not top notch we'd take Ranaut for a Burberry ambassador, although she seems so unofficially. No, we are not complaining because it's not the brand but how she mixes and matches them and carries all off is what is responsible for her place in this fashion list.
So these are the top three choices of the Fashion Police for Fashionistas of 2014. Had we had more places to award, we are sure a few other actresses must have made to the mark as well, but alas; we have only so many of the prestigious spots. Good luck to everyone else for the coming year. Like always, we will be watching out for the most fashionable divas of Bollywood throughout the year 2015 as well, sincerely hoping that someone from the industry indeed catwalks their way to the top tier of fashion and gives the above mentioned actresses a tough and healthy competition. Till then, stay fashionable peeps! Do let us know what you think through your feedback in the comment box below.