With the year 2011 all set to bid adieu, we at India-Forums, were brainstorming on what special could be gifted to our dear readers. Last year, we brought you the Top 10 shows that should make a return to your TV screens on popular demand.Similarly, for this year we've thought of a treat that you will remember as a record on entertainment news.

We bring to you a flashback of the main events that captured the minds of the audience. It's a daily treat leading up to the New Year where we will be covering different topics, and the countdown begins today.

Going with the current trend of television, it is essentially the survival of the fittest. There were a lot of shows that were promising, for which a lump sum amount had been set aside for publicity. But unfortunately, the shows that had promised a new beginning in the industry could not even last for a year. The year 2011 saw certain number of shows which finally could not make through to the top of the list and failed to meet the desired expectations.
Mukti Bandhan:
The striking promos and the grand sets flaunted it;s 'entry soon' to the popular channel, Colors. The show that was primarily based on Harikishan Mehta's novel of the same name failed to really impress the audience even though it had powerful characters. Crores were spent on the sets of the show to portray the rich and the elegant Gujarati family of the Viranis. We wonder if it was the channel they pitched it to, that went wrong or was it because the Indian audience was not ready for a change from the daily rona-dhona. The reason be it any, the show lasted only for nine months.

Shobha Somnath Ki:
The show that marked the comeback of theatre and film adept, Sadashiv Amrapurkar had a promising effect on the viewers. The young Shobha (Ashnoor Kaur) showcased an excellent performance and her efforts are well appreciated even today. But seems like the audience were not really satisfied with the way the show was displayed,  considering the show suffered in TRPs. The show that began as a daily, is presently aired as a bi-weekly. The show that had spellbound arts worth more than crores, failed on the small screen. Let us hope the show picks up in the coming days. 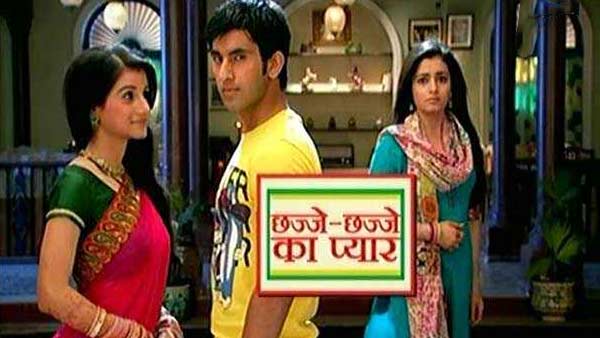 The first time when Endemol (co-producers of shows like Geet Hui Sabse Parayi) thought of coming up with their individual show, never must have they expected a response of such a manner. Chhajje Chhajje Ka Pyar, the promos of which promised a unique and sweet family drama that begins on a terrace, turned out to be the clichd 'best friends turned lovers' story. The show that began in February ended the ride in July.

Sanskaar Laxmi:
After writing several television top shows including Kyunki Saas Bhi Bahu Thi and Koshish Ek Asha, Rajesh Joshi's Production venture definitely had great hopes to capture the eyeballs. Zee Network did its ritualistic grand scale of publicity with their hoardings and promos. A huge Shiv-Ling was built exclusively for the show with great labour work which went in vain. Though the show gave Veebha Anand and Rohit Purohit a break as the leads, the show failed to gain the numbers that was necessary for a survival. The show survived only for nine months.
Gulaal:
The first show that was shot on an HD Camera, Gulaal proved to be a brilliant show with the quality that it portrayed. The show that adhered to the roots of the concept from where it had started till the end, failed to gain the expected TRPs even after being in the Prime Time slot. Though the show failed to garner numbers, we still remember the happy face of Manasi Parekh as the lively Gulaal. The show lasted for ten months.

Just Dance:
It is better not to estimate the investment they made on the show. Star Plus brought in the handsome hunk and the 'Greek God' of Bollywood, Hrithik Roshan to Indian television with this dance reality show. But seems like the Indian audience was not really impressed with the way the show was staged and this was evident from the dropping numbers they garnered. But the show proved to be of great help for the participants as Hrithik gave his personal contact details to them so that they could get in touch with him whenever they need any help.
Ritz JeeLe Ye Pal:
How many of you have followed this show regularly? A travel reality show that hit the screens with great hopes, but lost the connecting thread with the audience. The weekend shows of Star Plus also included Love U Zindagi, which also failed to impress the audience. Though the show was the televised version of Imtiaz Ali's hit flick Jab we Met, the magic did not work on television.

DID Doubles: Zee TV created history on Indian Television by bringing in the top dance reality show ever, Dance India Dance. After its two successful seasons, the makers brought another version with DID Doubles with Remo and Terence missing. The audience saw Marzi and Rajiv in place of them with Gita. Though the show brought in great talents, the show did not click as expected.

This was a glimpse of the shows that came with a promise but lost the TRP battle. There are several other shows that are waiting to hit screens in 2012. Let us see how they perform on Indian Television.

Tomorrow we will bring to you another topic for discussion. Till then, waiting for your comments and feedbacks.

palma0211 8 years ago what publicity are we talking about????hardly anything was seen in hoardings,posters or even bus advertisement...

intruderfast 8 years ago mukti bandhan was one of the best show i came across on indian tv, horribly disappointed in audiences who r still in that saas bahu mode ,yes iu think if it would have been on sony it would have worked better , colors shows r always regressive

AreYaar 8 years ago Gulaal is everything that a great show is made of...shows on TV should actually watch and learn from this show...how to adhere to a story, how to create compelling drama without meandering into meaningless draggy twists and above all creating such a wonderfully multi-layered soulful story that will remain iconic. Gulaal is on a level of it's own that most shows can't begin to touch. I hope the makers of this show are able to create more wonderful projects of this sort in the future...a finite story that is done justice to in every way. A masterpiece which had the quality of making me eagerly await every epi...can't say that for any other show now.

smarty22 8 years ago Gulaal is the best show EVER on Television!!!!
It had the best story,acting,diretion and cinematography!!!!!
Miss u GulSar...

chandnisahar 8 years ago Mukti bandhan was a great show with wonderful actors and different concept.may be the show was not seeong so much in indiait does not mean it is a bad show bcoz TRp matter including saas bahus .
and DID is wonderful and best dance show ever.love salman , shakti and binny also.
looking forward for DID season 3.

EXOL 8 years ago Gulaal was the best show of 2011. Just coz the show ended in ten months does not mean it was a miss. It was classic story which was showcased with utmost perfection. Gulaal had fans from all over the world. It was immensly popular show. Just coz it dint had the TRP's like crappy saas bahu drama it does not imply it was a miss. Kesar and Gulaal have etched a place in its audience's heart for time immemorial. I do not get why channel never promoted such a beautiful show...forget channel even india-forums was biased towards it.

akspra 8 years ago please let endemol come up with geet season 2 , it will be a huge hit .

memad 8 years ago I fall short of words to express how thankful and how much I love the entire team of Geet hui sabse parayi for their excellent outstanding out of this world dedication passion professionalism hardwork they have put in to gift Our Divine GHSP MAANEET... please consider to bring back the magical gurmeet n drashti together in geet 2 or in new show.