Mumbai, Jan 12 (IANS) He may not have been able to 'Bend It Like Beckham', but football buff Boman Irani thinks the character of a washed-out football coach with a shady past in 'Dhan Dhana Dhan Goal' was his biggest challenge in 2007.

'Quite a few movies have washed-out coaches, like 'The Longest Yard'. The character was a bit of a cliche, but to make it new was the challenge,' Boman told IANS.

'Goal' was shot in real football locations in London.

'We shot at the Manchester stadium which is the Mecca of football. I'm really excited. 2007 was an exciting year for me.'

For Vivek Agnihotri's 'Goal', while other actors prepared for their roles by getting in shape, Boman went the other way. 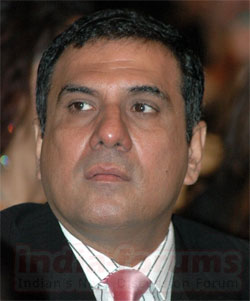 'I let go as far as my physical fitness is concerned. The coach was a spent force, hence out of shape. If I was meant to be a footballer, I'd lose weight and become lean and mean. But I played a washed-out guy with a sordid past running away from the truth.

'I think I did not need to look like Boman, but like someone who may have been an athlete 20 years ago. So, I had to look out of shape but hint of being in shape at some point of time in the past. It's interesting to raise the bar for myself. I like to revel in the tension of getting into the character.'

Commenting on his role in 'Heyy Babyy', he said: 'In 'Heyy Babyy' I played the baby's granddad who was a little mean. Director Sajid Khan and I used to have a regular movie quiz sessions on the sets. He reluctantly conceded defeat to me. And I'm very proud.

'Had I not been hooked to Hindi movies as a kid, I don't think I'd have fitted into this world, given the world that I come from.'

'Yeah, we seem to be running into each other all the time. I'm fond of her.'

Unlike others of his ilk, Boman is happy with the fan attention he is getting.

'They become obsessed and nasty only when you snub them or cut them off. I always speak to them patiently. The more you deny them, the more persistent they become. I think I deal with them smartly.

'Attention is nice. When someone at a restaurant sends a note scribbled on a napkin and says this is the first time he's reaching out to an actor, it feels really good.'