Zee TV, once again, reiterates it tag line 'Har Pal Banaye Ek Naya Rishta' by initiating a unique event for its Delhi viewers and thus creating a new bond with them. 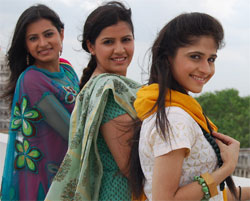 Featured Video
Delhi's very own daughter, Simmi Sethi, is all set to get married to Rajeev Bhalla. With a view to seek the Goddess' blessings for this couple, the Sethi family has arranged a 'Mata Ki Chowki' for friends and relatives. In this religious event, Zee TV seeks Delhiites' active involvement and hence invites viewers' participation at the Chowki.

Renowned bhajjan singers – Narendra Chanchal, Richa Sharma and Tarun Sagar along with Zee TV's very own, L'il Champs, will add glitter to the event with their harmonious performances. The exciting part of the event would be that Delhiites, for the first time ever, would get a chance, to not only attend the 'Chowki' but also be a part of the show's shoot. The Chowki would be held on October 13th at Raja Garden Grounds at 7p.m.

Commenting on the same, Mr. Akash Chawla, Marketing Head, Zee TV, said, "Connecting to our viewers through every possible touch point has always been our endeavour. Through this event, we would like to show our gratification towards the viewers and provide them with a larger-than-life experience. We are sure that they would make the most of it."

To seek their blessings and personally invite the viewers at the Chowki, the star-cast of '12/24 Karol Bagh' would visit the devotees at Jhandewala Temple and the Banglasaheb Gurudwara. The stars would also distribute invites amongst the passengers in Delhi Metros and the residents of various societies across the city. Special buses would be arranged to help viewers commute to-and-from the location of the event. Along with heavy on-air promotion on all the network channels, Radio spots and Print media will also be used to publicise the event.

+ 5
13 years ago great work zee it will get needed publicity. i hope though wedding does not take place between 2 ppl who are not compatible at all.

+ 8
13 years ago wow this is going to be interesting
it's so nice to see zee tv having event's like these, it makes the show look very real.