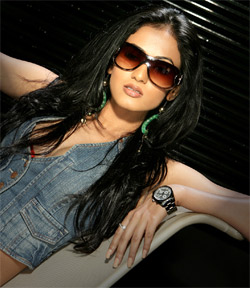 You must have heard fans weighing their idol actors with gold and coins. But would not have heard of an incident when a fan has weighed his favourite actor with flowers.

Yes, exactly this is what happened with Sonal Chouhan, the petite ‘Jannat’ fame bimbette. A fan was so impressed with her that he sent her a bouquet with more than 1000 flowers to weigh her with it. “Sonal first got scared thinking she is been stalked,” informs a source close to the actor. “But then she was pleasantly surprised as she realized that it wasn’t the case,” further adds the source.

And the most interesting part of this entire incident was that Sonal took more than 2 hours to count the exact number of flowers which was more than 1000.

Well, Sonal must be on cloud nine. But she isn’t enjoying it to the fullest. Reason – she is regretting being ultra thin for she would have received couple of hundred more flowers had she been a little more plump!
Featured Video