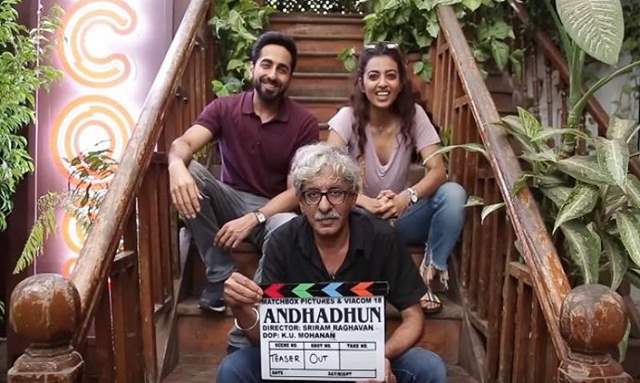 Andhadhun was one of the most-appreciated movies Bollywood had made in 2018. The thriller-crime impressed the audience and also received great reviews from the critics. The Sriram Raghavan directorial won many accolades at the National Awards. The movie not only won the awards for Best Hindi Film but its lead actor Ayushmann Khurrana also won the Best Actor award his performance in Andhadhun.

After basking in the achievement for the past few weeks, Sriram Raghavan who received the Best Director Award opened up about the casting process of the film at the Indian Film Festival of Melbourne. The talented director revealed that Ayushmann Khurrana was not the choice for Andhadhun at all.

The director went on to say how several well-known actors had turned down Andhadhun before Ayushmann Khurrana came on board to play the visually-impaired pianist.

He said, “A lot of big actors said no to the film. They couldn’t understand how the movie would pan out. At the time, we didn’t have the complete script. And I was like, if they can’t understand it now, then it’s fine because they won’t suit the role.”

The Badlapur director had various actors in mind for the role, but Ayushmann’s name never came up! That was until the Dream Girl actor texted Sriram asking to audition for the part.

When asked if he could play the piano, the 34-year-old actor said that while he knew how to play the guitar, he would learn the keys for the film. Sriram says it was the enthusiasm that he was sold on.

Once the film’s casting was complete, he was convinced that he had found exactly what he the story demanded — an actor who was well-versed with musical instruments and could take to piano easily and an actress (Tabu) who could take on Simi so effortlessly.

When quizzed about the shooting process and whether a dark film could be draining on the cast and crew, he said, “I remember the crazy journey all of us took. The film is good crazy and good mad. We experienced that first hand. We were literally living it, it was organic and it was a great journey.”

And people here wonder how only Ayushman is offer such roles.

Well, he should have gone with the complete script. Can't blame the actors who refused.

The only one I remember according to blinds and rumors was Varun, as he didn't liked ghe initial script or something. Although, it also was reported Varun was interested more in the script which he is doing next with him.

The only one I remember according to blinds and rumors was Varun, as he didn't liked ghe initial script or something. Although, it also was reported Varun was interested more in the script which he is doing next with him.