This shot was written for the contest in this forum.
Dedicated to PrincessAish. Very few people on IF know that she is my elder sister. She has inspired me in many ways and has suggested me this forum to express my writing and talent.
Hope you all enjoy it. 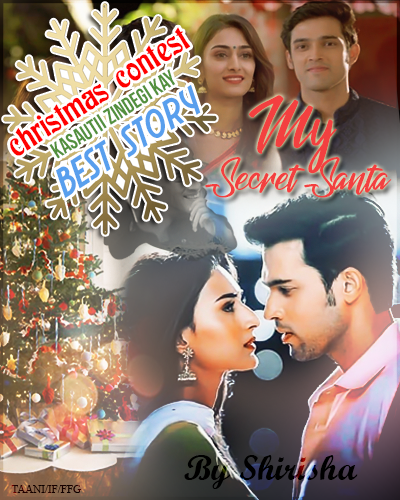 Anurag was done! He was done sitting around and mopping.  He was done feeling bad about the good for nothing Naveen Babu cheating on Prerna. He was done enduring Nivedita's suspicious gaze on him. He wanted out and he knew precisely how to get it.
He stopped his car in front of Prerna's house. He didn't know why but he needed to talk to her. He wanted to talk to her. He climbed up the ladder and jumped inside. He already knew her room and was confident of sneaking into the right one.
Prerna was lying on her stomach head facing his left, fast asleep. A slow smile crept on her face when she felt a hand carress her hair and forehead. Soon it felt funny like something was crawling on them. A spider?
Confusion replaced her smile and she got up with a jerk. She was about to yell when Anurag placed his hand on her mouth.
She looked in his eyes and was shocked at his presence.
"Anurag!" She whispered as loudly as possible. "What the hell are you doing here? And what was the need to coming here like this? What if you had fallen down? You..."
"Relax, lioness!" He smiled.
Anurag poured himself some water as Prerna continued to scold him.
"Are you done?" He asked surprised. "You are shouting as if you are my Girlfriend."
Prerna chose to shut up on that. After sometime, Anurag made himself comfortable on the chair.
"But why did you come by window?" She asked.
"Because if I come by main door at this time, aunty would have asked me questions and I am not in that frame of mind to answer." He sighed.
Prerna shook her head on him.
"But why did you come this time?"
"Because I have something for you." He smiled.
"What?"
Anurag gazed at the clock and as soon as it strike 12, he bent down and picked up a parcel handing it to Prerna.
Prerna held the parcel. It was heavy.
"What's this?" She asked confused.
"Your Christmas Present. Merry Christmas, Prerna."
"Thanks, Anurag. But you needn't to.." she started only to be cut by him.
"Stop being formal okay?" He said. "Now open it."
She smiled and worked on opening it, patiently yet quickly.
She was happy to find the love story books. All, happy and romantic. She smiled at him.
"You know me pretty well." Prerna commented.
"Well.. what are best friends for?" Anurag said and both of them smiled.
"You always wanted a love story of yourself." His words made her numb. "You always wanted a fairytale wedding."
Prerna couldn't decide what to say. Yes. She did. But what now? All her dreams were crashed by her oen hand. Because, she didn't had a choice. She tried to hidr her tears from him.
"Don't start again, Anurag. Let's just not talk about it."
Anurag's heart ached a little hearing her weak voice. So he decided to change the topic. He didn't want to see her upset.
"You know, what's funny?" He smiled. "Nivi Di was asking me about us, so I cleared, I explained that there is nothing between us."
"There is nothing?" Prerna asked.
"Yes," Anurag said. "No.. I mean there is nothing."
He fumbled. God knows why.
"You could have called me, right? We would have met outside."
Anurag couldn't decide what to say. Yes. He could have done that. But why didn't he. She was right. Wasn't it enough of him to just sneak into her room so late?
"Anurag..?" He realized Prerna calling him. "Where are you lost?"
"It's.. its nothing. Just let it be. I will see you at the party." He said and went towards the window.
"Party?" Prerna stopped him.
"Yes. The Christmas party?" Anurag exclaimed.
"Oh yeah! I almost forgot."
Anurag smiled and climbed out through the window.
"Careful." Prerna smiled.
After he was gone, she looked at the gift her Santa gave her and smiled, sadly.
Basu mansion was beautifully decorated for the Christmas party. The family had planned the game of secret Santa and unfortunately, Anurag couldn't be a part of it as he was out for an important business meeting at that time. While Mohini tried to convince everyone gor not arranging it without Onu, Anurag convinced her not to spoil everyone's happy mood for him. And they were going to reveal the gifts now.
While everyone in the family sat in a round, Anurag sat in a chair and watched them. Prerna and her family were also a part of it and he was glad to see his mother was trying to adjust with Prerna's family. He was happy to see all of them happy. As he saw Prerna, she smiled at him. He smiled back.
Suddenly, his eyes caught a huge gift wrapped, his name imprinted on it. He frowned and picked it up. It was a huge, thin and long wrapper. He started to open it.
When he was done, he saw a large photo frame, full of various pictures of him, his mother, his family. His eyes didn't fail to notice Prerna in a few pictures. He didn't has to guess who did it.
He smiled and turned his gaze towards Prerna. She smiled at him happily. He mouthed a thank you to her and she shook her head on him as usual.
He couldn't be a part of the game, still had his Secret Santa. And indeed, best friends do know you pretty, the best.

Amazing os. It was a cute update. Hoping to read more such kind of OSes
1 Likes this
REPLY QUOTE