In a unique promotional tie-up for the supernatural thriller Ek Thi Daayan (2013), co-produces Vishal Bharadwaj and Balaji Motion Pictures have created a 16-episode TV series titled Ek Thi Naayika. The 16-episode series has eight different horror stories based on the daayans (witches from the film) each story spanning two episodes. "Every mahanaayika who has been roped in represents a particular state or city in the country to ensure that the show has a pan-India appeal,"  says Tanuj Garg, CEO, Balaji Telefilms. "Eight leading ladies are coming together in different haunted locations in a coup of sorts. Emraan Hashmi, Konkona Sen Sharma, Huma Qureshi and Kalki Koechin, actors from the film, are also debuting on TV with this series," says Garg. The series will air on Life OK  since the channel doesn't have any horror shows airing currently. "Also, it's an aggressive and ambitious channel with a strong marketing commitment. Ek Thi  Naayika is Ekta's idea, but Life OK has come up with a promising programming that flags off on March 9," he elaborates.
Episode Schedule  (subject to change)
Edited by TheGreatKingdom - 9 years ago
1
REPLY QUOTE

Ekta Kapoor is at her best again, as she is trying to bring back the magical combination of her yester year shows in the innovative promotional campaign for her upcoming movie Ek Thi Daayan through the thrill based show on Life OK, titled Ek Thi Nayika.

The super-duper combination of her successful show Kaahin Kissii Roz, Mouli Ganguly, Yash Tonk and Sudha Chandran will be back again in one of the episodic stories in Ek Thhi Naayka. We hear that the talented actress Sudha Chandran who is popularly known as Ramola Sikcand even today, will essay the role of an actress in the story.

When contacted, Sudha Chandran confirmed this piece of news saying, "Ekta always creates wonders on television and I am priviledged to be back with her again, that too along with Mouli and Yash Tonk. All my success in television is courtesy Ekta, and I am excited to shoot for this particular series. And the best part of it is that we are back again at the 11 PM slot, similar to the Kaahin Kissii Roz days."

Yash Tonk too confirmed the news stating, "Yes, I am looking forward to this shoot. I do not have much detail as we have not started shoot yet."

Lot has been said and written about Ekta Kapoor's innovativemarketing strategy for promoting Ek Thi Daayan through episode series, Ek Thi Naayka on Life OK. Interetingly, Ekta Kapoor with this series has also planned to bring back the magic of few Balaji ace shows and their Naaykas.

Like Smriti Irani will be seen along with Amar Upadhyay after long hiatus, we too hear that Mouli Ganguly will be seen joining hands with Kahi Kissi Roz Team ( Yash Tonk, Sudha Chandran). Mouli will represent Kolkatta as a Naayka and we too hear is, Sumona Chakravarti of fame Bade Achhe Lagte Hain is the latest to join the bandwagon.She has already started shooting for the show and will be seen essaying a meaty role in Ek Thi Naayka's Kolkata special episode. Konkona, who also features in the Kannan Iyer's directorial debut, does a cameo in the episode, which will go on air Saturday and Sunday. She plays herself in it.

Based in Kolkata, the story is about a middle-age theatre veteran Tanushree Dasgupta, played by Mouli. She is paying a tribute to her mentor and one time leading actress Uma Biswas by doing a play in her honour.

During the staging of the play she meets a newcomer called Laboni, who gives a fantastic performance in the play.

But Tanushree realises unusual things happen when Laboni is around.

Then enters Konkona, who helps Tanushree find out the real picture.

Ekta and co-producer of the film Vishal Bhardwaj will also be seen doing cameos in 'Ek Thhi Naayka'.

Even other cast members Emraan Hashmi, Kalki Koechlin and Huma Qureshi will appear in forthcoming episodes of the show.
1
REPLY QUOTE 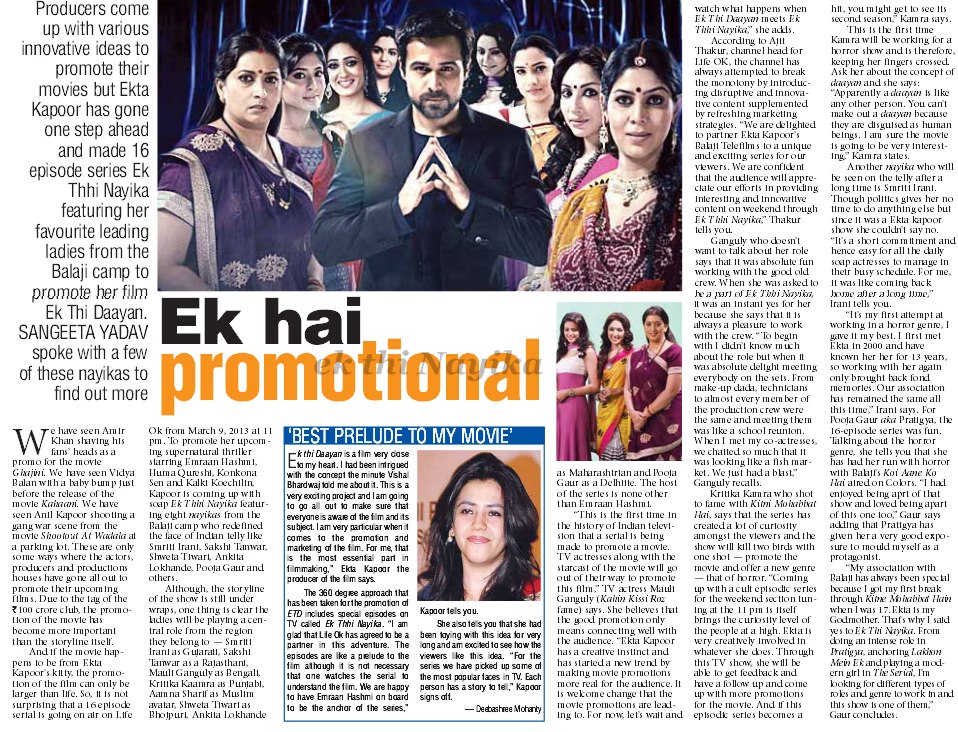 TB: Bonding on the sets of Ek Thi Naayka