Avani puts forth her conditions yet again in Dor..

Avani, the protagonist of Star Plus' new show Dor, explains her stand before Bhaskar and his parents.. 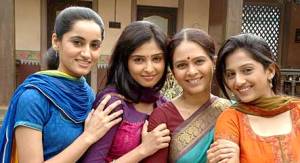 The protagonist of Star Plus' Maayke se bandhi... Dor, Avani (Shweta Munshi) has put forward her conditions for marriage, as her mother is busy looking for a suitable groom for her daughter.

Tonight's episode will see Bhaskar (Rohit Khurana) and his family visiting Avani's house with their proposal.

Our source states, "Avani will again put down her conditions, that she will continue to work even after marriage, and that she will give her hard-earned money to her mother till  the time someone in her maayka starts to earn. Bhaskar's family comprising of his mother (Rohini Hattangady) and father (Anjan Srivastava) are shocked to hear this stand of the girl. As we know, Bhaskar and his mother especially, have an eye on the salary that the girl will bring to their house. However, Bhaskar will succeed in convincing his mother for the marriage after a long ordeal which will go on for about 10 days".

We contacted Rohini Hattangadi and she says, "Yes, in today's episode we will be introduced and what happens next is something to be watched. There will be a question mark on whether the boy's family agree to the conditions or not".

Let's see how Bhaskar manages to convince his mother..

Anand Goradia to enter in Dor

After portraying the powerful and dominating character of Gajendra in Colors' Na Aana Is Desh Laddo, Anand Goradia will be seen in a completely different avtar in Star Plus' Maayke se bandhi...Dor. In the show Anand will be playing the role of a typical Maharashtrian Government official.

When contacted, Anand told Tellybuzz "Yes, I will be seen in a fresh and new character called as Prabhu, who is very stingy and a grey shaded, works in a Government office for a small salary. He plays the brother in law of the protagonist Rohit Khurana."

Speaking more on the character Anand says "Prabhu is stingy, so much that he purposely sends his wife to her home every morning after a fight to save the food grains at his house. He practices this so that she has her meal of the day form her house. But in the evening, he goes back to make up with her to bring her back home. He goes to those heights that he locks his phone and proceeds for the office so that nobody makes a call from his phone."

Even though Gajendra and Prabhu have grey shade in their character, Anand differentiates both and says "Both the characters have grey shaded, but both are completely different from each other. Gajendra is from a sophisticated family whereas Prabhu belongs to a middle class family. I am enjoying playing both because, for Gajendra I had to learn Haryanvi lingo and for Prabhu I am learning Marathi." 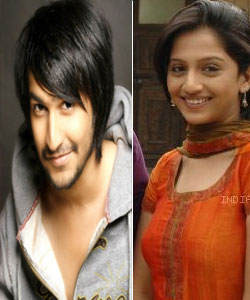 Ankur Moondhra who was last seen doing a cameo role for Star One's Horror Nights is now back with Star Plus' Maayke Se Bandhi…Dor.

Latest we hear is that Ankur Moondhra will be essaying the character of Rajesh who will fall for the younger daughter of Kaveri's (Aishwarya Narkar) family.

"Aditi has a lot of unfulfilled desires  because of the lack of finances in their household. However, she still has not got the maturity to control the urge of dreaming about all the luxuries in life. Rajesh will fall for Aditi in the very first meeting", adds our source.

The source further goes on, "When Aditi does not fall for Rajesh's looks, he poses as though he is very sound in finances, and is a rich guy with lot of cars.  Aditi will immediately fall for his richness, but the surprise here is that Rajesh knows everything about Aditi and her family".

His entry is expected to air this Wednesday. Confirming the buzz Ankur says, "Yes, I play the love interest of Aditi".

We contacted Krutika Gaikwad and says, "Yes, such an entry is happening but I can't divulge anything more on it."

We too hear that the character might go grey in future.

Mystery man to make his entry in Dor

A major twist awaits viewers in the Star Plus show in the form of a mystery man.. 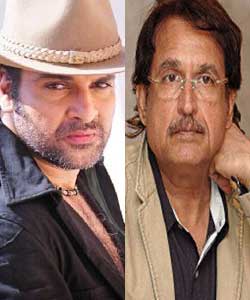 The recent episodes of Star Plus' Maykee Se Bandi… Dor is focusing on a mystery man who is time and again helping Avani's (Shweta Munshi) family in different ways like offering gifts, or paying off the college fees etc. This prompts Avani to find out the person behind all this!

Wondering who this mystery man is? Well, here is the answer…

A source informs Tellybuzz, "The mystery man who is following Avani and her family is none other than Avani's father who got separated from Kaveri years back. He is now back with an intention to sort out all the differences with family and his wife."

Auditions are on for the character and if sources are to be believed, talented actors,Shahbaz Khan and Kiran Kumar are short listed to essay the role. Things are almost finalized, and the man playing Avani's father will be declared soon..

We contacted Shahbaz Khan who confirmed, "That's true that I have been approached but things will get clearer in a week's time."

While Kiran Kumar too commented, "I don't have any issues taking up the show as UTV is a good production house with the channel being Star Plus. Otherwise I don't want to comment anything else."

Let's wait and watch to know if it is Shahbaaz Khan or Kiran Kumar who bags the role..