Hussain, Shakti to play lead in a Bollywood film 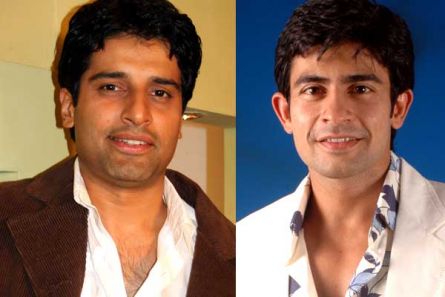 Television actors are now beginning to find their feet in Bollywood. The success of actors like Rajeev Khandelwal and Prachi has led the way for others. Well, Hussain Kuwajerwala and Shakti Anand , two of television's most popular actor, are set to set to play lead in a Bollywood film.

While this would be Hussain's debut film, Shakti has already completed the shoot of the yet-to-be-released film Gharonda. Well, both Gharonda and the new film are directed by Shrabani Deodhar, who has films like Silsila hai pyar ka, Pehchaan: The face of truth to her credit. Well, Shrabani is also the mother-in-law of Shakti.

We called Shakti but he refused to comment. However, confirming the news, Shrabani Deodhar says, "Yes, it's true that I've signed Hussain and Shakti as leads for my upcoming film which is tentatively titled Dekha jayega. I'm yet to cast the female protagonists. The film also stars actors Om Puri and Manoj Joshi. Dekha jayega is basically a comedy film. The shoot is expected to start somewhere in September."

We wish success to both actors with Dekha jayega.

Thanks 4 sharing yes this is old news but nywayz thanks