This book as a Prequel as you know which is titled The Marriage Contract and is more of a Fan Fiction even though the characters hold no resemblance to the show except in their names. If you want to read more about Lavanya Parents and the early childhood of Lavanya, check it out , below is a short glimpse of the Prequel . 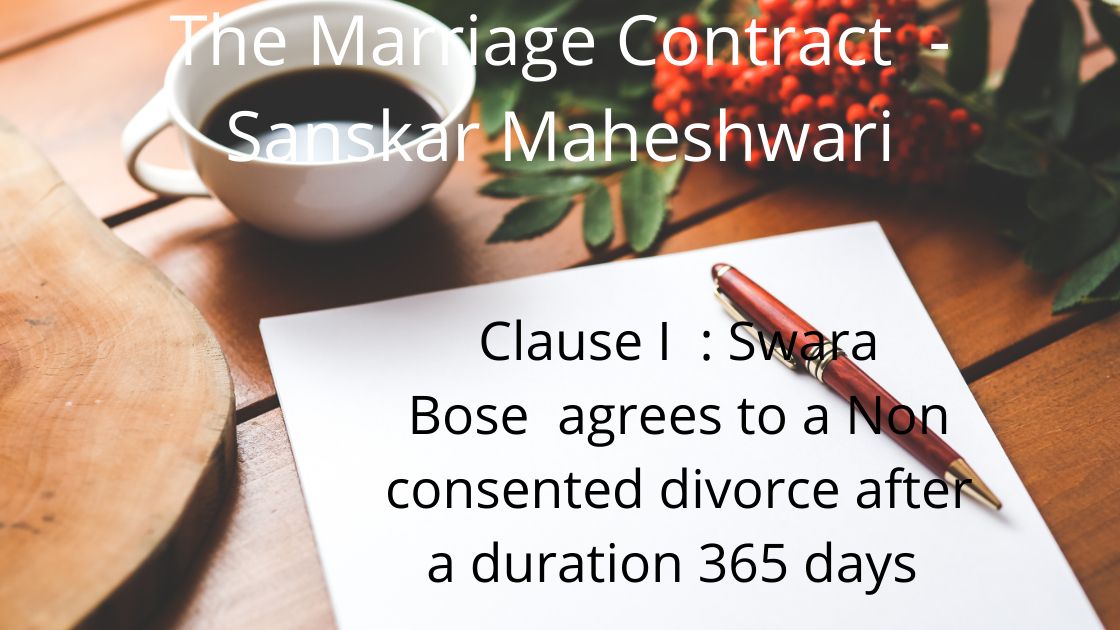 Sanjeev Roy had been married for thirty two years and for the first time in his life he felt guilty of destroying an young man life . He was so sure the young man would choose the path he had laid before him .But his opponent was smarter than him and thus he created an new path for himself .

" Since I have full filled the terms of my uncle's will .I expect as our family lawyer, you will take care to provide his family with his inheritance .If I found out you have held back even an penny from them .You will meet me on court .And since I have paid the price I expect you to keep your word as an gentleman .Also under no circumstances will you reveal the part of I played to  to my family ." the young man spoke up .

He had the signs of becoming an enigma like his uncle .His friend durga prasad Maheshwari was known to rule the courts of Kolkata with his sharp mind and determination .His clients came first for him and he had an undefeated streak for over ten years till he clashed with his nephew two years ago , the young man before him

Sanskar Maheshwari was ruthless when needed but also an man with principles .Because he and his uncle didn't see eye to eye ,he didn't join the family firm but started his own firm few years back .And though he share the same undefeated streak with his uncle ,they both have different preference while choosing their clients .

Durga prasad Maheshwari always choose the powerful ones and no matter what crimes they were charged with he had been able to prove them innocent .And Sanskar was the total opposite . He picks the weaker ones those who couldn't afford him or any reputed lawyer . And most of his case are pro bono .If not for the huge trust fund he got from the insurance policy in the event of his parents death ,he might be broke . But what the uncle and nephew had in common was the love for their family .

Durga Prasad Maheshwari knew the hatred his nephew had over the concept of marriage .All his attempt to bring his nephew in the path of matrimony failed but he didn't let his death end his fight .In his will he stipulated his nephew needs to be married within 365 days of his death if not all his inheritance will go to charity .

While Sanskar would not have batted an eye to lose the wealth his uncle had accumulated over the years . He knew his cousin and aunt might not feel the same .So he agreed to get married.

And that where Sanjeev had made an huge mistake . Instead of making Sanskar know about the stipulation in his uncle will at the time of his death he waited till eleven months  have passed. He was selfish but he hoped in event of having less than an month to find a bride . Sanskar would see reason and marry his daughter .

After all they loved each other once and they can make it work again , He miscalculated because all the facts he knew about Sanskar indicated he didn't have an single girl friend after his daughter .So how did he manage to find a bride and marry her with in he will never know . All he knew was Miss Swara Bose was only lucky person .

" I am sorry , I have chosen to be an father first ,I had no right to with hold the information from you for this long ." Sanjeev spoke up ..

" It my fault for trusting you , I should have asked to see the will at the time of reading .I didn't so it was my mistake .And you made an slight miscalculation I am not the same person who begged your daughter to marry me . Even if she was the last person on earth I will never marry her " Sanskar voice echoed in the room .

" I know you were hurt by her rejection .But she was young and she did love you and you have to admit no one would have liked to marry an cripple ." Sanjeev said and winced at this choice of words .

" You are right to say people would not have lined up to marry me few years back .But now I am one of the most eligible bachelor in city .And while you assumed I wouldn't have been able to find an bride in such short time .I did and let me tell you something I like Swara much better than your daughter who claimed to love someone and ran away when things got tough ." Sanskar replied back .

" I hope you are happy .." Sanjeev wished Sanskar sincerely .

" I will " with the two words as parting shots Sanskar left the house .Only when he for into the car did he collapse at the enormity of what he done today .He was married to Miss Swara Bose . The last person on earth who deserve an husband like him .

" You are an cripple ,how can you expect me to marry you .I don't intend to spend my life serving you . I am sorry but no I can't marry you Sanskar " those were the words spoken to him by the love of his life . He might not be physically deformed any longer .Lots of corrective surgery and painful therapy have made him regain the strength in his legs .But his heart that got broken refused to mend .

Meanwhile Swara Bose scratch that Swara Maheshwari stood in front of mirror and took in her appearance in the pale moonlight the Mangalsutra in her neck dazzled . She stared at her reflection .She was an newly wed and she just got married three hours ago .The marriage ceremony included two witness , her best friend Nisha Patel and her colleague Arjun Khanna .Then there was her husband \boss Sanskar Maheshwari .

She starred at her reflection hoping for the disappearance of the chain that bound her to an another man .She laughed at her self for falling into the trap of marriage once again .Sanskar Maheshwari has no clue to whom he married that was the only relief and also the fact the marriage was meant for just 365 days .

She took the signed marriage contract from her drawer and carefully read the twelve clause in it .Then she smiled a little if both of them sticked to the rules they will be free of each other in exactly 365 days .

P.S : That it for now. Let me know your thoughts and feedback . Click the thumbs up icon if you liked it

Ram Kapoor believed that he had the best friends world could offer and while ...

This is a story of a girl who want to enjoy her life fully She don't believe ...